The march to accountability

Accountability: everyone thinks we need more of it, but exactly what is it we need more of and why? Although views are changing, the last few weeks reveal a remarkable amount of clarity and agreement on four basic principles that I think now define Canadians’ expectations on accountability in government.

First and foremost, the public expects its leaders to be of good character and to use their office to advance the public good. This ‘principle of integrity’—or the lack of it—is behind current outrage over the Senate.

The abuse of an already-offensive system of privilege touched something vital—even primordial—in the public mind. It not only sparked calls for heads to roll, but for all public figures to begin posting salaries and expenses and for new and much more stringent rules of conduct for the future.

If well-crafted, such measures could be timely and important, but they will not be enough to meet Canadians’ expectations. When people say they want integrity, they want more than compliance with rules. They want to feel they can trust their leaders.

Measures to curb abuse will always fall short of this simply because integrity is about more than following rules. Fortunately, there are other ways to promote integrity. Other principles are at work around accountability that can be leveraged to strengthen and reinforce the system as a whole—and that holds promise for the future.

Let’s start with the Forum poll last week that found Toronto Mayor Rob Ford still enjoys a 44 per cent approval rating. While earlier findings were similar, this poll adds that most supporters now also feel the mayor should resign or seek treatment. This might sound confused, but it is actually consistent with long-established views on accountability.

On one hand, the public has a right to expect some real control over public institutions. Traditionally, this means electing someone they trust to oversee the business of government on their behalf and to resolve issues that arise. Ford Nation still “supports” the mayor because they believe—rightly or wrongly—that he has been a genuine champion on this level. In their minds, he was ready, willing and able to “Stop the Gravy Train,” when no one else would.

On the other hand, Ford’s integrity is now undeniably compromised. Even his supporters agree that, at some level, he has betrayed the public’s trust. As the Forum’s Lorne Bozinoff notes, the poll results are interesting precisely because they show that Ford Nation is dealing with this development by distinguishing Ford’s performance on the job from his failings as an individual.

In other words, in their eyes Ford still scores well on oversight, even though he has slipped on integrity. Whatever one thinks of this view, the distinction between integrity and oversight is basic to our system of accountability. More interestingly, drawing the distinction allows us to identify a third and increasingly important principle: transparency.

If integrity and oversight have a long history, the interest in improving transparency in government is relatively new and, I think, a consequence of what Neil Nevitte famously called “the decline of deference.”

While the public used to rely mainly on oversight to ensure government business was conducted effectively, citizens today are far less willing to leave this task to their leaders. Instead, they insist on their right to judge government’s performance for themselves—and demand the information and tools to do so. This, in turn, has focused much attention on government reporting and access to information.

As a result, over the last few decades, real progress has been made on transparency. There is, however, a long way to go. Indeed, as I’ve recently written, this is a—perhaps the—key challenge for the immediate future. Things are now at the point where real progress on transparency will stall without a major rethinking of how and why access to information works, as well as new tools and measures to support Open Data. And that will pose a direct challenge to the culture of secrecy that surrounds governments.

Finally, a fourth and potentially transformative principle of accountability is rapidly gathering steam: public voice. In a democracy, citizens expect to have a real and meaningful voice in public affairs. Traditionally, this condition was met through elections. People chose someone they felt spoke to their concerns and who would represent them in government.

Today, more and more people are unwilling to remain passive participants between elections. They want a meaningful say on issues that matter to them. It is still unclear how far governments can, will or should go to find a new balance between executive power and public involvement in policymaking, but this is a critical part of the new landscape around accountability. And new social media tools are moving the yardsticks every day. Any serious effort to strengthen accountability must include this new principle of public voice.

In sum, accountability is a special kind of political concept, which we can call a balancing concept. It shows how these four principles—integrity, oversight, transparency and public voice—interact with one another to produce public accountability, as the diagram below illustrates: 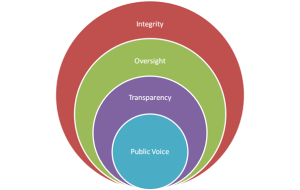 There is no single or right way to strike the right balance between the four principles in the system. Each government must find its own path and its own balance. Nevertheless, all four principles are now embedded in our political culture and working together holistically to shape citizens’ expectations on accountability.

Finally, let’s note that accountability is the foundation of legitimacy; and that without legitimacy, democracy dissolves. A government that ignores any of these principles therefore does so at its peril.

Dr. Don Lenihan is Chair of the Ontario Open Government Engagement Team and Senior Associate at Canada’s Public Policy Forum in Ottawa. He is an internationally recognized expert on democracy and public engagement, accountability and service delivery. Don’s latest book, Rescuing Policy: The Case for Public Engagement is an introduction to the field of public engagement, a blueprint for change, and a sustained argument for the need to rethink the public policy process. The views expressed here are those of the columnist alone. Don can be reached at: Don.Lenihan@ppforum.ca or follow him on Twitter at: @DonLenihan