Throngs reach out to Harper at Western Wall 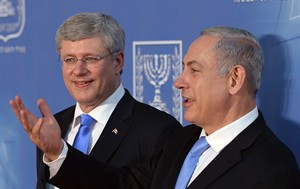 JERUSALEM - Throngs of Israelis literally reached out to touch Stephen Harper on Tuesday as he basked in a hero's welcome at the sacred Western Wall, shortly after he and his Israeli counterpart insisted their countries do, indeed, have differences of opinion.

Netanyahu and his wife then accompanied Harper and his wife Laureen to the Yad Vashem Holocaust Memorial Museum for a harrowing look back at the horrors perpetrated on the Jews by Nazi Germany.

"They are remembered always, in our hearts, in our prayers and most importantly in our resolve," Harper wrote in the museum guest book. "Never again."

The loquacious Israeli leader explained much of what the Harpers saw at the museum, an elegant building designed by Canadian architect Moshe Safdie that's situated on a sunny Israeli hilltop speckled with majestic cedars.

Netanyahu spoke at length at every stop of the tour, explaining the exhibits to the Harpers. At the end of the visit, they stopped in the Hall of Names, where the names of Holocaust victims are permanently preserved.

A 10-metre-high conical structure overhead holds photos of hundreds of victims, many of them young children.

But the day's most remarkable moment came at the Western Wall, where Harper — fresh from a speech Monday that was effusive in its support for Israel — received the sort of affectionate reverence that generally evades him back home.

Just after sunset, the prime minister was greeted by hundreds of onlookers who cheered and reached out their hands to touch him as he made his way from his vehicle to the wall.

A beaming Harper stopped and chatted briefly with the throngs before solemnly observing the wall. After he made his way back to his motorcade, a woman in the crowd was heard to shriek: "He touched my hand!"

There was a far more crass element to the visit, however, when a Conservative MP pleaded with a prime ministerial aide to be allowed into the Western Wall ceremony from the wrong side of the barricades.

"It's the re-election," said Mark Adler, a Toronto-area MP who flew to Israel with the prime minister's delegation wearing a T-shirt emblazoned with his name.

"This is the million-dollar shot."

Earlier Tuesday, Netanyahu acknowledged that Harper disagrees with him on the issue of the Israeli settlements in what Palestine considers disputed territory. Harper has steadfastly refused to clarify the government's position on the issue, but the Foreign Affairs Department website says it deems Israel's occupation of the territories to be a violation of the Fourth Geneva Convention.

"I guarantee you that's the case," Netanyahu said when asked if Harper parts ways with him on the issue.

Harper, meantime, chided the media for expecting him to publicly single out Israel for criticism on its stance on the territories, expressing confusion that he was asked to do so even while in Ramallah. He suggested questions from the media after he met with Mahmoud Abbas, the Palestinian Authority president, should have focused on Palestinian efforts to advance the peace process.

Harper offered $66 million in new aid to the Palestinians during his foray into the West Bank.

But on Tuesday, the prime minister spoke of Israel's isolation in the troubled region.

"The one lesson I think we have learned is that when somebody is a minority, particularly a small minority in the world, one goes out of one's way to embrace them, not to single them out for criticism," he said.

That goodwill notwithstanding, the volatile realities of the Middle East were readily apparent as Harper toured Jerusalem. Harper's scheduled visit to the Dome of the Rock, a hallowed Muslim shrine on the Temple Mount in Old Jerusalem, was cancelled due to security concerns.

A Palestinian woman at the Western Wall, however, scoffed at that explanation, saying it was far more likely that the Israelis had ordered Harper not to go — yet another illustration of the tensions and distrust that characterize relations between Jews and Arabs in the Middle East.

"Planning and logistics required on a trip like this can be complicated, and unfortunately we weren't able to make it work in a manner that satisfied the security organizations involved," Harper spokesman Jason MacDonald said in an email.

The prime minister's fans at the Western Wall weren't limited to Israelis. Toronto's Micki Mizrahi, who paid her own way to travel to Israel with the Canadian delegation, was equally star-struck.

"There aren't words to describe the excitement of our entire community that our prime minister is here and speaking to Israel, speaking to Canada and really telling the world that he believes in human rights and Israel's democracy is a voice that is necessary in this region," she said.

"It's incredible for us to feel pride as Jews and pride as Canadians at the same time."

Earlier Tuesday, Harper and Netanyahu got down to brass tacks, signing a wide-ranging set of bilateral goals, including an agreement to expand a free trade pact during their meeting in Jerusalem.

The two leaders said free trade negotiations would be held in Israel from Feb. 3-9 to expand and modernize the Canada-Israel Free Trade Agreement initially signed in 1997.

The aim of the new round of talks is to reduce technical barriers to trade, more quickly resolve market access irritants and create new opportunities for Canadian agriculture, agri-food, and fish and seafood companies in the Israeli market, Harper said.

"An expanded and modernized trade agreement with Israel will generate more jobs and economic growth at home and in Israel, while strengthening the close friendship that both countries enjoy."

The two leaders also agreed Tuesday to a lengthy list of common interests to pursue under what's called the Strategic Partnership memorandum of understanding.

The goal is to build on bilateral merchandise trade between the two countries, which the Prime Minister’s Office says was worth $1.41 billion in 2012.

At the news conference that followed the meeting, Harper once again touched on Canada's full-throated support of Israel.

"I wouldn't want to say there is no price for Canada in the Arab world (for supporting Israel)," but differing opinions can be respected if they're appropriately expressed, the prime minister said.

Netanyahu added that there is now a "new Middle East."

"If you scratch the surface underneath, you'll see that there is a concern in many of the countries in the Middle East right now," he said.

"The first is the arming of Iran with nuclear weapons. And the second is the spread of the Muslim Brotherhood. And in meeting those twin challenges, these countries do not see Israel as their enemy but as being on the same side of a difficult conflict."

On Monday, Harper delivered a historic speech to parliamentarians in the Knesset in which he warned of a new age of anti-Semitism and said those who oppose the Jewish state are little more than hateful anti-Semites.