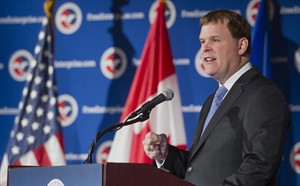 OTTAWA - The Harper government made clear Wednesday that it sees the terrorist entities spawned by Syria's spiralling civil war as a serious security threat that will wreak havoc well beyond its borders unless someone finds a solution.

Prime Minister Stephen Harper and Foreign Affairs Minister John Baird offered that shared warning from separate foreign locales Wednesday, but admitted that they — like most others — are short on concrete solutions.

"I don't tend to see this, though, as really just a Syrian issue," Harper said in Tel Aviv before departing for Jordan, a neighbouring desert kingdom of three million people that has been overwhelmed by the overflow of the Syrian humanitarian catastrophe.

Once there, the prime minister is expected to come face to face with the human cost of Syria's nearly three-year-old conflict when he visits a vast camp that's warehousing almost 600,000 refugees.

"What, in my judgment, it has clearly become over time is very much a sectarian war that is backed by and part of a wider sectarian conflict in the region," Harper said of the conflict that has left 130,000 dead and millions more homeless.

Earlier in the day, Baird told an international peace conference in Switzerland that the regime of Bashar Assad deliberately opened the door to terrorists in order to help defend the Syrian president's personal power and privileges.

Baird said Assad invited in the terrorist organization Hezbollah and its state sponsors in Iran. Other groups came in through the back door to join the fight, including affiliates of al-Qaida, he said.

"Assad's war created a vacuum that has been readily filled by terrorists," the minister said in a speech in Montreux, where he was attending the Geneva 2 peace conference.

"The terrorist threat that is developing in Syria is real. It is a threat to the stability of the entire region and beyond. It is a war we have seen before on the streets of Baghdad, and its agents are ones who have been hardened by the wars of the last decade."

He called on the various Syrian factions to start the peace process by opening routes for humanitarian aid, setting up prisoner exchanges and negotiating local ceasefires.

"At the same time we call on Syria's opposition to adopt, without any ambiguity, the vision of a future Syria that respects human rights and accepts Syria's diversity," Baird said.

"We call on the opposition to clearly reject the extremists in their midst and fully embrace, in word and deed, democratic values and the principles of tolerance."

Canada has expressed concerns in the past about militants in the fractured Syrian opposition. But Baird also commended their courage Wednesday in coming to the peace talks despite formidable odds, including death threats.

A political settlement is the only way to end the fighting and begin the slow process of rebuilding the shattered country, he said.

Harper, however, sounded less optimistic that Syria's fractured opposition would ever prove capable of governing the country.

The prime minister said Assad's Alawite-Shia government, backed by Iran, was fighting "a Sunni insurgency that is increasingly extreme ... and dangerous and backed by countries that come from that side of the spectrum."

"I don't see how the victory of either of those forces could be in the interests of Canada or Israel or anyone else," he said.

"The only real victory can be some kind of accommodation and conciliation between them. I don't think any of us know how we do that, but that is the only way to move forward and anything we can do, we will do."

In the meantime, Baird lamented the effect of the ongoing strife on a generation of displaced Syrian children.

"Each day, and in every moment, Syria's children are becoming members of a lost generation, learning about brutal violence rather than science, math or literature."

The Canadian chapters of Save the Children, the UN Children's Fund (UNICEF) and World Vision urged Baird to make the plight of children and families a priority at the Geneva 2 talks.

"The government of Canada must push hard at these negotiations for greater humanitarian access to people who need help within Syria and for more support from the global community to help millions of Syrian refugees who have fled to neighbouring countries," said World Vision Canada president Dave Toycen.

Baird also pointed to another major development this week that has brought home the human suffering of the crisis: a report by war crimes experts who obtained 55,000 photographs that document the killing of 11,000 Syrian detainees.

It's one thing to recite the number of dead and displaced, he said, but quite another to contemplate the photos that have been released in recent days.

"They're deeply disturbing, shocking and should be yet another reason to commit ourselves to a political solution," Baird said in a conference call.

A member of the Syrian opposition held up a few of the photos during his opening comments to the conference, he added.

"It was a very quiet room."

Baird also called on Russia to play a greater role in ending the bloodshed. The support offered by Russia has allowed Assad "to soldier on for the better part of three years," he said, noting Russia's role in the international effort last year to begin the process of stripping Assad of his chemical weapons stockpile.

There is an "expectation" that Russia will exert more influence on Assad to end the bloodshed and find peace, he said.