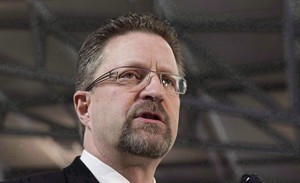 Chuck Strahl is pictured in Ottawa on February 3, 2011. Strahl says he is stepping down as chairman of the Security Intelligence Review Committee, Canada's spy watchdog. Strahl, who came under fire earlier this month for registering to lobby on behalf of Northern Gateway Pipelines, insists that he's done nothing wrong, and is quitting to avoid becoming a distraction for the committee, which helps to keep an eye on the Canadian Security Intelligence Service. THE CANADIAN PRESS/Adrian Wyld

OTTAWA - Chuck Strahl has quit as chairman of Canada's spy watchdog following accusations of inappropriate lobbying activity, but continues to insist he has done nothing wrong.

In a letter to the prime minister made public Friday, Strahl says while he scrupulously followed conflict-of-interest rules, he is stepping down as head of the Security Intelligence Review Committee because he does not want to be a distraction from its important work.

As the federally appointed chairman of the committee, known as SIRC, Strahl helped keep an eye on the Canadian Security Intelligence Service.

Opposition MPs have criticized the former Conservative cabinet minister since learning earlier this month he registered to lobby on behalf of Northern Gateway Pipelines.

The New Democrats said it should be common sense that Strahl — someone on the federal payroll — should not lobby for a pipeline seeking federal government approval.

Strahl's Dec. 6 registration with the B.C. Office of the Registrar of Lobbyists says he intends to arrange a meeting between the pipeline concern and B.C. Natural Gas Development Minister Rich Coleman.

The federal government has not yet said whether it will allow the project to go ahead.

The resignation came late Friday afternoon as MPs prepared to return Monday to the House of Commons after a lengthy break.

In his letter, Strahl said he had carefully ensured that the Privy Council Office and the office of ethics commissioner Mary Dawson were always aware of his activities, both as a volunteer in various organizations and in private business.

"Throughout the term of my appointment, I have checked with these experts and have appreciated and followed their advice to me," Strahl's said.

Without exception, they indicated at all times that "I have been fully compliant with all relevant rules and regulations, and have affirmed that all of my post-political activities were consistently appropriate and above board," he wrote.

"Any recent criticism in this regard is entirely spurious and unfounded."

Strahl becomes the second consecutive review committee head to leave in a flurry of controversy.

Strahl, an MP from 1993 to 2011, served in several cabinet portfolios in Stephen Harper's cabinet, most recently as transport minister.

He released two letters Friday from Dawson that addressed the allegations of conflict, first raised early this month by the Vancouver Observer, an online news site.

Both Dawson letters — one to Strahl, the other to Liberal MP Joyce Murray — say the review committee chairman had not contravened the federal Conflict of Interest Act, to which Strahl was subject in his role at the committee as a "public office holder."

"At present, I have no information that leads me to believe that there are issues or matters involving Enbridge presently before SIRC that could place Mr. Strahl in a conflict of interest nor any information that Mr. Strahl, while engaging in activities as a consultant for Enbridge, used information obtained while in his position as a public office holder," says the Jan. 15 letter to Murray, who had raised concerns with Dawson.

Dawson notes in her Jan. 8 correspondence with Strahl that he had planned to recuse himself from any matters involving Enbridge that might come before the review committee.

In his resignation letter, Strahl said he retired from politics three years ago and did not "wish to be in the centre of the political fray. Nor do I want to be a distraction from the important work SIRC does everyday in ensuring the security of Canadians."

Harper said in a statement Friday that Strahl "has submitted his resignation to me, and I have accepted it, effective immediately."

The Conservatives, as usual, take action only after they're caught, said NDP House leader Nathan Cullen.

"The timing of this resignation shows that the Conservatives realized they had a new scandal on their hands. A government that's proud of its actions, doesn't make an announcement like this on a Friday evening."

Liberal public safety critic Wayne Easter said Friday that Strahl had to choose between being spy watchdog and working as a lobbyist. "SIRC is losing a good individual but I still see that there is a conflict there."

Strahl did not immediately return a phone call Friday.