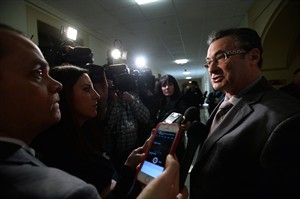 Liberal senator George Baker, reacts to Leberal leader Justin Trudeau's proposal to boot senators from the caucus in Ottawa on Wednesday January 29, 2014. The longest serving senator was surprised, but supports the idea. THE CANADIAN PRESS/Sean Kilpatrick

OTTAWA - Meaningless stunt or the most profound reform of the scandal-plagued Senate in history?

Those were the competing narratives Wednesday after Justin Trudeau booted all 32 Liberal senators out of his party's national caucus.

The Liberal leader called it the most significant and concrete action ever to reform the maligned upper house, aimed at reducing partisanship and restoring the Senate's intended role as an independent chamber of sober second thought.

But the Conservative government dismissed the move as a gimmick, a perception fuelled by the newly liberated Liberal senators who immediately reconstituted themselves as the Senate Liberal caucus — and pronounced that nothing much has changed.

"There are no more Liberal senators," Trudeau told a news conference on Parliament Hill after informing the 32 senators they're no longer welcome at the party's caucus meetings.

After the initial shock wore off, the senators emerged from a meeting declaring that they'd been "set free" and praising Trudeau for a bold, courageous move that will help erase the perception that the Senate is merely a partisan echo chamber of the House of Commons.

That said, they immediately used their newfound freedom to contradict Trudeau's assertion that they are "formerly Liberal senators" who will now sit in the Senate as independents.

In a later interview, he added: "It's up to us what we call ourselves."

Cowan said he'll remain Liberal leader in the Senate, his colleagues will remain designated as Liberal senators, his caucus will remain the official Opposition and, as such, will remain entitled to Senate funding for his office and for a caucus research bureau — an interpretation later accepted by Senate Speaker Noel Kinsella.

Moreover, Liberal senators will remain friends with their elected counterparts in the House of Commons, will continue to be party members and will continue to work toward electing Trudeau as prime minister, Cowan added.

In short, he said: "I think not a lot will change."

That allowed Stephen Harper to slough off Trudeau's challenge to the prime minister to follow the Liberal lead and similarly cut loose the 57 Conservative senators.

"I gather the change announced by the leader today is that unelected Liberal senators will become unelected senators who happen to be Liberal," Harper scoffed in the Commons.

He called Cowan's assertion that not much will change "the understatement of the year" and said Canadians want an elected Senate, not "a better unelected Senate."

Pierre Poilievre, the Conservative minister responsible for democratic reform, dismissed Trudeau's gambit as "a smokescreen" designed to "distance himself" from potentially damaging news in an impending interim report by the auditor general.

The spending watchdog is examining each senator's expenses in the wake of a scandal over allegedly fraudulent expense claims that has rocked the upper chamber for more than a year.

NDP Leader Tom Mulcair noted Trudeau voted against an NDP motion last October that called on both the Liberals and Conservatives to cut their senators loose. He, too, suggested the looming auditor general's report might have something to do with Trudeau's change of heart.

Trudeau denied the imminent report had any bearing on his decision. And a spokesman for auditor general Michael Ferguson said no one has seen a draft of the interim report.

Trudeau insisted his move was predicated on his belief that extreme patronage and partisanship are at the root of the Senate expenses scandal.

"The Senate is broken and needs to be fixed," he said. "If the Senate serves a purpose at all, it is to act as a check on the extraordinary power of the prime minister and his office, especially in a majority government.

"The party structure in the Senate interferes with this responsibility. Taken together with patronage (appointments), partisanship within the Senate is a powerful, negative force. It reinforces the prime minister's power instead of checking it."

If elected prime minister, Trudeau said he'd go further. He'd appoint only independent senators after employing an open, transparent process, with public input, for nominating worthy candidates — much the way recipients of the Order of Canada are chosen.

The Harper government has asked the Supreme Court of Canada to advise whether it can unilaterally impose term limits and set up a process for "consultative elections" of Senate nominees. Most provinces maintain such reforms require a constitutional amendment approved by at least seven provinces with 50 per cent of the country's population.

It has also asked the top court to advise whether outright abolition of the Senate would require the approval of seven provinces or unanimity.

Trudeau said he believes his proposals are "the most meaningful action possible without changing the Constitution." But he added: "If the Supreme Court says more can be done, we will be open to doing more."

"Obviously it's a step in the right direction, but why stop there? Why stop at 32? We want to get rid of the Senate altogether."

Trudeau countered that promising abolition is "either deliberately and cynically misleading or empty and foolish," given that it would require "the most significant amendment to the Constitution since the creation of the Charter of Rights and Freedoms" in 1982.

Under the Liberal party constitution, senators are members of the national caucus and entitled to special privileges, including automatic delegate status at conventions.

Trudeau is expected to eventually seek amendments to reflect his decision to boot senators from the caucus and to remove their special privileges, although they'd be allowed to remain as regular party members.

However, it is too late to submit amendments for consideration at the party's next gathering in Montreal next month.