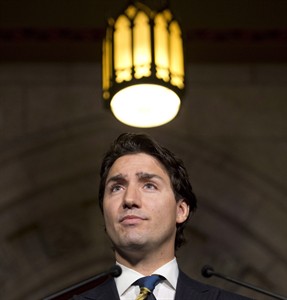 OTTAWA - It was business as usual in the Senate one day after Justin Trudeau shook up the upper chamber by booting all senators from the Liberal caucus.

But despite the outwardly unchanged proceedings, senators and MPs were wrestling behind the scenes Thursday with some immediate repercussions from the Liberal leader's surprise move.

Some are relatively minor. For instance, the 36 Liberal MPs have to find a new room in which to hold their weekly caucus meetings. Their old meeting room in Parliament's Centre Block can only be booked by a senator — and none remain in the Liberal caucus.

Liberal MPs could wind up meeting off Parliament Hill entirely.

Of bigger concern to liberated Liberal senators is how they're going to fulfil their function of giving independent sober second thought to legislation — the ostensible aim of Trudeau's decision to cut them loose from their more partisan elected colleagues — without the research resources they used to share with their House of Commons brethren.

With only two staffers per senator, limited office budgets and only about $200,000 in annual research funds for the Senate's official Opposition contingent, Liberal senators used to rely heavily on the analysis of bills provided by Liberal caucus researchers and policy experts in various MPs' offices.

They're now grappling with how to restructure their own operations to fill the gap as best they can. It may mean relying more on Library of Parliament researchers and ending the practice of using the opposition research budget to fund individual senators' special projects.

Over the longer term, some senators believe the changes will have to be even more dramatic, leading to a complete overhaul of the way the Senate conducts its business.

Sen. George Baker said he and the other 31 turfed senators have agreed for now to continue designating themselves Liberal senators in order to maintain funding for research and an opposition leader's office, as well as membership on Senate committees.

But he maintained that's only a "stop-gap" measure until Senate rules — which are entirely geared to having two political parties in the chamber — can be adapted to suit the new reality that Liberal senators are now independent.

"Senate rules and procedures and customs are based on the two-party system," Baker said.

For instance, he said senators should not have to belong to a recognized political party to be entitled to research funds or to participate in Senate committees.

The turfed senators' decision to continue sitting as Liberals contradicted Trudeau's assertion Wednesday that "there are no more Liberal senators" and gave fodder to his political rivals to mock his move as a meaningless stunt.

And it meant that once the dust settled, proceedings in the Senate appeared unchanged.

One liberated senator, Dennis Dawson, suggested Trudeau could have avoided the confusion and embarrassment over the status of Liberal senators by consulting with them before announcing his unilateral decision to turf them from caucus.

While he agrees with the decision to reduce partisanship in the Senate, Dawson told The Canadian Press, "It was done in a clumsy way" — saying publicly what a number of his colleagues are muttering privately.

Whatever lingering resentment over being blindsided by Trudeau's announcement and whatever hurdles they face scrutinizing legislation with a much-reduced research capacity, Liberal Senate leader James Cowan said Liberal senators are determined to make the most of their new independence.

Carignan doubted being cut loose from Liberal caucus will make much difference to the behaviour of Liberal senators, who have demonstrated in the past that they don't take direction from Trudeau.

Trudeau urged Liberal senators last fall to abstain on a vote to suspend three senators who allegedly made fraudulent expense claims. But Carignan noted only a handful did as their leader asked, the vast majority of Liberals opposed the suspension motion.

Carignan did point to one change that has resulted from Trudeau's decision: without senators, there is now no one in the Liberal caucus to speak up for the interests of Alberta.