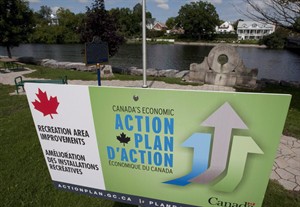 OTTAWA - Canadians appear to be tuning out another federal ad campaign, this one by the Canada Revenue Agency.

The tax agency spends about $7 million each year touting the Harper government's special tax breaks aimed at families, small businesses and others.

But an opinion survey commissioned by the agency found fewer Canadians paying attention, and fewer taking any action as a result of seeing the ads, most of which are on television.

Less than a third of 1,000 people surveyed last year could remember the ad campaign without prompting, the lowest unaided-recall level since the annual campaigns began seven years ago.

And only 11 per cent did anything as a result of seeing the ads, just half the rate recorded in the winter of 2009, the high-water mark of the campaign.

The results are found in an internal government analysis from last July, obtained by The Canadian Press under the Access to Information Act.

The weak results parallel the declining impact of the Finance Department's ubiquitous Economic Action Plan ads, which federal surveys show have also elicited an underwhelming degree of notice or action from Canadians.

Last year's CRA campaign cost taxpayers $7.4 million, including about $523,000 for production and $3.2 million for placing television ads. The spots ran between Feb. 18 and April 14. The 15-second TV ads all featured the Economic Action Plan logo.

The ads, also placed in newspapers, on Internet sites and on posters in transit systems, promoted the new family caregiver tax credit, as well as four existing tax-relief measures, including the children's art tax credit.

The agency has spent $42 million since 2007 on ad campaigns touting tax relief, highlighting a series of targeted or boutique tax breaks that have become a hallmark of the Harper government's tax policy.

The Canada Revenue Agency launched its seventh such ad campaign last week, budgeted at another $6 million and running to the end of March.

A spokesman for the agency, Philippe Brideau, defended the 2013 campaign, saying the ads are often "competing for attention in the media marketplace, for example, other advertising campaigns and news events."

"Unaided recall is only one of the ways to measure effectiveness of an ad campaign," he said, noting that when respondents were prompted, 48 per cent remembered last year's campaign.

Brideau also pointed out that more than a quarter of those who did recall seeing the campaign visited the CRA website, as urged in the ads. "This was specifically the behaviour that the advertising campaign was intended to promote," he said.

The agency paid Opinion Research Inc. $17,500 to conduct the telephone poll last April, but the government carried out the analysis of the raw numbers internally.

Government policy does not require internal survey analysis to be posted publicly on a website, unlike analyses contracted with outside firms, meaning the final reports have to be requested under the Access to Information Act.

Opinion Research said its polling results are accurate to within plus or minus 3.05 percentage points, 19 times out of 20.

"These campaigns have been designed to help taxpayers take advantage of all the tax credits to which they may be entitled, and save money," he said.

"And they are working. For example, on average, Canadian families are now saving $3,200 per year, as a result of tax cuts introduced by the government."