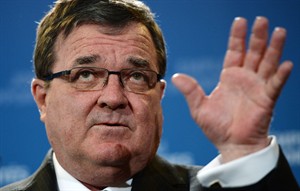 Minister of Finance Jim Flaherty holds a press conference in the media lock-up prior to tabling the budget in Ottawa on Tuesday, February 11, 2014. THE CANADIAN PRESS/Sean Kilpatrick

Of all the line items in the balance sheet of spending and squeezing, one clearly overshadows the rest — $7.4 billion in savings estimated over six years from cutting public-service compensation.

"The government's overarching goal in these negotiations is to reach agreements on total public service compensation that are fair and reasonable to employees and to taxpayers," says the budget document.

By comparison, the budget estimates only $1.8 billion in savings from various other measures.

The public service will also shoulder a two-year freeze in government spending announced last fall, representing savings of $1.6 billion. That's likely to translate into the loss of more positions and programs inside government: salaries account for well over half of departmental spending.

The freeze will apply across government, although not to transfer payments, making for a potentially difficult situation for departments already adjusting to several years of spending reductions. National Defence, for one, has lost $2.1 billion in operational funding since 2010.

Any initiatives that will require extra staff and spending will have to be funded from within existing operating budgets.

Often the loss of programs isn't clear to the public until much later — for example, the closure of many national parks during the winter and the loss of certain passenger train routes in the last couple of years was never signalled in any budget document.

At the core of the compensation plan proposal is a change to the health benefits available to retired bureaucrats. Under the proposal, the government will go from paying 75 per cent of the costs of the health plan to sharing the costs equally with pensioners.

Employees would also not be eligible to participate in the program until they've worked for the government for six years, versus the current threshold of two years.

The Finance Department says the change will provide major savings to the government, but won't be a huge burden to the average public-service retiree — increasing the cost of annual payments to $550 from $261.

The largest federal public-sector union did not condemn the change outright, but said it hoped the government would sit down at the table to discuss implementation.

"Where they already have a retiree that's only getting $20,000 per year in their pension, and to suggest that they'll have to pay double the amount, then obviously we should look at a phase-in for them," said Robyn Benson, national president of the Public Service Alliance of Canada (PSAC).

"We should look at individuals who have a threshold where they don't have to increase to 50 per cent. There are a number of ways that they can do this."

Treasury Board President Tony Clement, whose department oversees contracts with public-sector unions, has also signalled his intent to change the disability and sick-leave system for bureaucrats.

The potential savings in decreasing the number of yearly sick days and other measures was not booked in Tuesday's budget, and the parliamentary budget officer has questioned the government's numbers in estimating its sick-day liability.

Clement has indicated he is ready to go head-to-head with the unions over the changes. The federal government has 27 collective agreement renewals to negotiate starting in 2014.

The Conservatives have made labour one of their political punching bags, advocating for greater financial reporting of spending by unions, among other things.

"I think we have to have a grown-up relationship with the unions but that doesn't mean kowtowing to their every whim and demand," Clement said at last November's Conservative policy convention.

"That day is over. I'm going to have respectful bargaining, of course, but at the same time I'm going to reflect the public interest and the interest of taxpayers."

NDP Leader Tom Mulcair pointed to the announcement in the budget of the hiring of 200 more food inspectors as evidence the Conservative plan to cut the public service has been poorly planned.

"It's very popular with a certain population to say you're going after public servants, it's the gravy train argument," Mulcair said.

"The women and men who serve the Canadian public every single day and deliver the great services that we've given ourselves in this country are not to be attacked and shouldn't be used as political scapegoats."