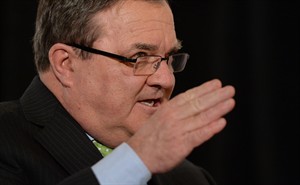 Minister of Finance Jim Flaherty speaks at a post-budget event in Ottawa on Wednesday, February 12, 2014. THE CANADIAN PRESS/Fred Chartrand

Finance Minister Jim Flaherty opened a rift within the Conservative cabinet Wednesday by casting doubt on the wisdom of using next year’s expected budget surplus to expand income-splitting ahead of the next election.

Income-splitting for families with dependents under the age of 18 was a key promise the governing Tories made in the last election, but with a catch: it was contingent on a balanced budget.