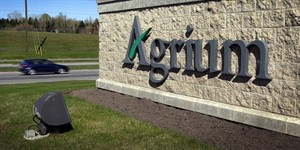 A car passes the Agrium head office in Calgary, May 11, 2012. THE CANADIAN PRESS/Jeff McIntosh

VANSCOY, Sask. - Dozens of workers at a potash mine in Saskatchewan are safe after a fire broke out a kilometre underground and forced them to spend the night in emergency shelters.

More than 50 people were forced to seek refuge in shelters at the Agrium facility near Vanscoy after the fire started during a shift Friday night.

The site's general manager, Mike Dirham, said the fire started on a scoop tram, which is a type of underground loader.

Dirham said the tram has a fire suppression system, but he says it couldn't extinguish the flames.

At that point, Dirham said the miners headed for the shelters to escape the smoke.

"There is food and water and telephones in there where we can communicate with the people in each shelter. They vary in size from a capacity of holding 10 people to a capacity of 60 people," Dirham said, noting that miners don't need to wear masks while they're inside.

"They're a self-contained shelter. They just need to go in and close the doors and wait for emergency response personnel."

Dirham said an emergency response team headed into the mine and put the fire out. The mine was then ventilated to clear the smoke, but it was still several more hours before the air was considered safe enough for emergency crews to escort everyone to the surface.

All of the workers were out by Saturday afternoon and there were no injuries.

Dirham said the cause of the fire is under investigation. Provincial mine safety inspectors will be part of that process, he said.

He said underground operations will remain suspended until it is deemed safe to resume them.

About 650 people work at the mine, which is approximately 30 kilometres southwest of Saskatoon.

Just over a year ago, 318 miners raced to underground refuge stations after flames broke out at Mosaic's K2 potash mine near Esterhazy, Saskatchewan.

Workers waited for three hours while crews battled the flames and then a few hours more while the smoke cleared.

Another fire in September 2012 at PotashCorp's Rocanville mine in eastern Saskatchewan forced 20 miners to seek shelter in underground safe rooms.

No one was injured in either of those fires.