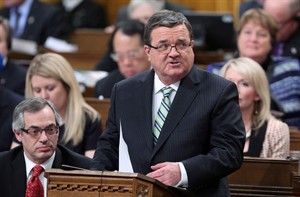 Finance Minister Jim Flaherty tables the federal budget in the House of Commons on Parliament Hill in Ottawa on Tuesday, February 11, 2014. Many middle-class families are struggling economically, but at least one of them is doing quite well, thank you very much: the working parents and two kids who appear as a fictitious examples in the federal budget each year. THE CANADIAN PRESS/Fred Chartrand

OTTAWA - Middle-class families are struggling economically, but at least one of them is doing quite well, thank you very much: the working parents with two kids who appear as a fictitious example in the federal budget each year.

Critics say the family's rapidly rising income is a complete fiction as well.

Last week's budget document introduced Blake, Laurie and their children, a made-up family pulling down $120,000 in combined salary — and enjoying $3,400 in annual tax savings, thanks to Conservative policies.

The previous two budgets provided similar examples: Michael and Kate in 2012 and Thomas and Colleen in 2013, each with two kids. In those budgets, the putative annual tax savings were $3,105 and $3,200 for these families, including tax breaks for children's fitness and arts lessons.

But a closer look at these couples' changing salaries shows some whopping increases, far above inflation and out of step with the workplace experience of many ordinary Canadians.

Along with those big income hikes come added "savings" in taxes. The family has saved $111 more on GST over the three budgets, for example, based on Conservative sales-tax cuts from previous years. Income-tax relief is about $100 higher in the last year alone, a result of the notional rise in salary.

The 2010 and 2011 budget documents do not contain thumbnail sketches of any made-up family, and the 2009 document had three different family examples not related to the latest series.

The family tax-saving numbers, rising to $3,400 from $3,100 over the last three budgets, have frequently been cited by Conservative government officials — including by Prime Minister Stephen Harper at a Calgary convention last fall.

"A typical family of four pays more than $3,000 less in taxes than when we came to office," Harper said Nov. 1 in a keynote speech to party faithful. "That's car payments for a year."

"It shows that their tax policy is based on make-believe accounting," MP Peggy Nash said in an interview from Toronto.

"The Conservatives are out of touch with the average family ... by claiming they've increased their incomes that dramatically over the last few years."

"It's simply unrealistic," she said, also accusing the government of fudging employment numbers to burnish their economic credentials.

A Finance Department official defended the salary numbers, saying they were based partly on Canada Revenue Agency data, derived from tax returns, and from private-sector economists' projections on salary increases.

"The annual income levels of the family of four example is based on the average family income actually reported by two-earner families with children using T1 data collected by the Canada Revenue Agency and income growth forecasts based on the most recent average private-sector economic forecast," Stephanie Rubec said in an email.

Rubec said the increased tax savings for 2014 are largely the result of additional GST tax savings, based on the family's higher income.