In US, Clark takes swipe at PM foreign policy 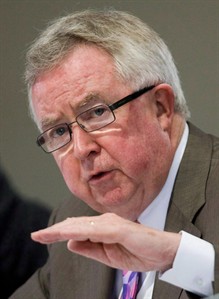 Former prime minister Joe Clark answers a question at a panel discussion in Ottawa, Monday June 22, 2009. Clark says he can't understand why the Harper government would bar the opposition from a delegation to Ukraine and suggests its combative approach to international issues sometimes hurts the country.THE CANADIAN PRESS/Sean Kilpatrick

WASHINGTON - Former prime minister Joe Clark says he can't understand why the Harper government would bar the opposition from a delegation to Ukraine and suggests its combative approach to international issues sometimes hurts the country.

Speaking to a U.S. audience, Clark, who also served as foreign affairs minister, said he regularly involved opposition parties on foreign missions — and Canada benefited as a result.

He cited one example in particular: his co-operation with former NDP MP Dan Heap. Clark said the Mulroney government was on the outs with some key left-wing actors in Central America, and the Toronto New Democrat helped establish valuable connections through his NGO contacts.

"Let me tell you what we did: we involved opposition parties regularly in activities overseas. We relied on them, heavily," Clark said.

"I do not understand why there is this exclusion of parliamentarians (in Ukraine) — if it happened."

He made the remark when asked about reports that Canada's main opposition parties had been refused spots in a delegation to Kyiv this week. The Conservatives called it a government trip, and added that the opposition didn't even deserve to go after Liberal Leader Justin Trudeau told a joke about Ukraine.

Clark spent an hour taking questions about his new book on foreign policy, "How We Lead."

The book is deeply critical of what it describes as the Harper Tories' "megaphone" approach to international affairs — in other words, plenty of loud grandstanding and not much constructive work on the ground.

He was equally critical when asked about the Keystone XL pipeline.

He said the government deserves some of the blame if the project is stalled. If the Harper government hadn't spent a couple of years shouting at the environmental movement, he said, it might not have attracted such opposition.

Clark told the audience that the belligerence began with verbal attacks by Natural Resources Minister Joe Oliver after the Conservatives won a majority in 2011, and continues to this day with environmental groups having their tax status threatened.

All of that, Clark said, got noticed by U.S. environmentalists who carry some influence in the White House.

"One of the real problems that I think lingers over that pipeline is, before the pipeline question arose, the Government of Canada deliberately went out of his way to be seen as an adversary of environmentalists," Clark told the forum at the Wilson Center.

"It just seems to me to have been an unwise way to set the stage for the case that we had to make... The steepness of the hill that Canada has to climb was created, in part, by the attitude of the Government of Canada on environmental questions."

Clark was complimentary of the government on some fronts.

He credited Foreign Affairs Minister John Baird for his sustained effort on behalf of homosexuals being persecuted around the world.

He also applauded the prime minister for embracing a free-trade agenda that includes the signing of a potentially historic pact with the European Union, and involvement in talks toward a 12-country Trans-Pacific Partnership.

But there was plenty of criticism — just like in the book.

The book calls for a more creative approach to foreign affairs, retooled for a new age, and suggests better outreach with increasingly powerful non-state actors like NGOs.

He laments that the current government, too often, leans toward disengagement.

The book cites as one example Canada closing its Iran embassy. Clark contrasts that with the Mulroney government's refusal to close its South African embassy in the 1980s, which he says helped it successfully fight apartheid.

"Canada now talks more than we act and our tone is almost adolescent — forceful, certain, enthusiastic, combative, full of sound and fury," says the book.

"That pattern of emphatic rhetoric at the podium, and steady withdrawal from the field, raises a basic question: What does the Harper government consider the purpose of foreign policy?"

He told his audience Thursday that, by the early 1990s, Canadians were tired of activist government following a Mulroney era marked by battles over free trade and the country's constitutional makeup.

He drew laughs by noting that Jean Chretien promised not to do anything with the constitution — and voters rewarded him with a majority.

"The problem is that, since then, Canada has not talked about much."

Clark was also asked about a provincial issue — the Parti Quebecois values charter.

He called the plan alarming. He said it's even more alarming that the PQ might be winning support because of it. A Quebec election is expected this spring, and the PQ has jumped to a strong lead in the latest polls.