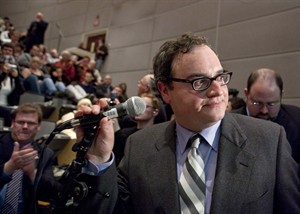 Ezra Levant is shown at the University of Ottawa in Ottawa on Tuesday, March 23, 2010. A Saskatchewan lawyer is alleging Sun News Network host Levant defamed him in a series of blog posts and is seeking $100,000 in damages. THE CANADIAN PRESS/Pawel Dwulit

TORONTO - Sun News Network host Ezra Levant caused "tremendous" damage to a Saskatchewan lawyer with blog posts labelling him a jihadist and a liar, the lawyer alleged Monday as his defamation lawsuit against the controversial media personality went to trial.

Khurrum Awan was completing his articling and looking for work as a lawyer when he alleges the most egregious libels were posted. He is seeking $100,000 in damages.

Levant's posts on his personal blog centred around Awan's testimony at a British Columbia Human Rights Tribunal case about a complaint over an article in Maclean's magazine from 2006, titled "The future belongs to Islam." Awan was a law student when the article was published and was one of a group of students who said they were concerned the article was Islamophobic.

Awan's lawyer Brian Shiller says Levant's statements included labelling Awan a jihadist, an anti-Semite, a liar, a perjurer and alleging that he acted in a conflict of interest.

They were made in the context of Levant trying to discredit human rights tribunals, which the host refers to as kangaroo courts, Shiller said.

"It's not about the truth," Shiller said in his opening statement to Ontario Superior Court Judge Wendy Matheson. "It's about denormalizing human rights commissions and the roadkill is Mr. Awan."

"The damage visited upon Mr. Awan as a result is tremendous," he said.

Awan testified Monday that seeing Levant's posts under the headline "Awan the liar" was "very upsetting."

"For myself seeing these blog posts also came up at a time when I was articling," Awan testified. "My call to the bar was planned. It went right to my credibility as a lawyer or a lawyer-to-be."

Levant's lawyer, Iain MacKinnon, said the defence is primarily one of fair comment.

The blog posts were based upon what Levant observed over two days of Awan's testimony at the human rights tribunal in 2008 and there is a factual basis for his comments, MacKinnon said in his opening statement.

"There's no doubt Mr. Levant sometimes uses colourful language or sometimes a derisive tone," MacKinnon said. "That is perfectly allowed under the defence of fair comment."

Levant was commenting on a matter of public interest, MacKinnon said, noting Awan never asked Levant for a correction.

"They were having and were part of a free-wheeling public debate...maybe not directly, but indirectly," MacKinnon said.

"The plaintff would have you believe that Mr. Awan's reputation has been roadkill. However, that is not obviously something we agree with at all. In fact, my submission is it can't be roadkill when you run out into the road and make yourself a target for issues of public comment and public controversy."

Awan was "very much front and centre" as part of a Canadian Islamic Congress-backed campaign against the Maclean's article, over which three human rights complaints were filed, MacKinnon said.

Levant's charge that Awan lied was based on Awan's human rights tribunal testimony that what he said at a meeting with Maclean's was not what he had described in previous media interviews, MacKinnon said. Awan disputes that.

In his blog postings Levant also accused Awan and the other students of a "shake down," an apparent reference to their request that Maclean's publish a counter-point article and donate some money to an organization working on Muslim issues. Awan said Maclean's shot down that suggestion pretty quickly in the 2007 meeting and neither he nor the other students were seeking money for themselves.

Levant's accusation that Awan was in a glaring conflict of interest when he testified was based on his view that Awan was both helping the prosecution and being a witness, MacKinnon said.

Though Awan was not the complainant to the human rights tribunal, he was involved with the Canadian Islamic Congress and previously served as its youth president, MacKinnon said. Awan had also been hired by the same law firm as the prosecuting lawyer and, along with the two other students who were at the meeting with Maclean's, sat at the counsel table for the hearing, MacKinnon said.

"He was assisting and acting as a witness," MacKinnon said. "In (Levant's) view that was a conflict of interest."

Awan denied that he sat at the counsel table.

His lawyer said it was a coincidence that the lawyer at the human rights tribunal worked for the law firm at which Awan was to start his articling term a few months later. They had only met in passing before that and the lawyer had nothing to do with Awan being hired, Shiller said. In fact, they worked for the law firm in offices in two different cities, Shiller said.

Awan is expected to finish his testimony and be cross-examined on Tuesday.