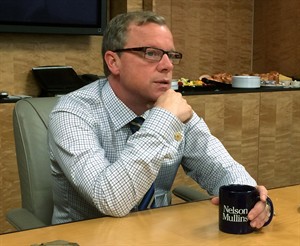 Saskatchewan Premier Brad wall listens during a meeting in Washington, D.C., Wednesday, March 5, 2014. Wall says he's ready to impose a modest levy on the oil-and-gas sector if it helps buy some goodwill in Washington. THE CANADIAN PRESS/Alex Panetta

WASHINGTON - A modest levy on the oil-and-gas sector might help secure Washington's support for the Keystone XL pipeline, Saskatchewan Premier Brad Wall said during a trip to the U.S. capital Wednesday.

But he stressed that any such penalty had better be small.

Wall pointed to Alberta's initial $15-a-tonne levy on greenhouse gas emissions as an example. The amount is deemed insignificant by environmentalists and Alberta's own provincial government has signalled a willingness to nearly triple the fee.

But Wall said he'd view that amount as a guideline, if the federal government winds up imposing oil-and-gas regulations in conjunction with the U.S. He said he'd hope that any Canada-U.S. deal on emissions targets would allow provinces to set their own fee.

"I think the price wouldn't be that different from what Alberta has done. I think you start slow," Wall told a group of Canadian journalists at a round-table discussion.

"I think you start slow and see what impact it has on the economy... I don't think you want to kneecap your economy with a carbon tax."

One benefit of having those rules in place, he said, is that they might provide "environmental elbow-room" for the Obama administration to approve Keystone.

He said there's now a political window to accept the project, and create some jobs, before this year's midterm elections. He said it might be easier to get that approval from the president, who is under pressure from his left-wing base, if he can point to some Canadian action on the environment.

President Barack Obama and the Canadian government have expressed a willingness to work together on new greenhouse-gas initiatives, while a presidential decision on Keystone is expected within months.

Wall added a defiant caveat, however: He can't believe the Keystone discussion has come to this.

While environmental concessions might make sense now, Wall said, Keystone should never have required what he called a "trick" — meaning new GHG actions — to get approval in the first place.

He joked that 75 pipelines already criss-cross the border under the "nose" of activists like actress Darryl Hannah and said he was stunned to see Keystone become such a rallying point for environmentalists seeking to pressure the administration.

He said it took too long for Keystone proponents to pivot to the environmental argument, even if Canada already had a case to make on that front — given that the countries already have the same emissions targets.

He admitted that Canadian leaders were caught flat-footed when environmental concerns stalled Keystone. He said everyone — the Harper government, provincial governments, and industry — shares some of the blame.

"We could beat ourselves up over what we could have done. But who would have thought (this would happen)?" Wall said.

"We've got people with really big megaphones and not a lot of technical ... credibility influencing a bunch of people on this thing."

Wall is in Washington to meet with pro-Keystone lawmakers, as well as a White House official, in addition to selling the merits of Saskatchewan's carbon-capture technology that he says could benefit both the coal and oil industries in the U.S.

On new regulations, however, one environmental economist said Wall's logic defeats itself.

If the whole point of introducing rules is to convince the Americans you're doing something on climate change, and then you insist on weak rules so the oil industry isn't affected, he said, isn't there a conflict there?

"In some ways those arguments feed into the opposition," said Andrew Leach, a professor at the University of Alberta and a former federal official. "Then you're essentially saying exactly what the (Keystone) opponents are saying."

Leach said that kind of mixed messaging has been typical of the Keystone debate.

He said it's been similar with the Alberta government, which went from calling the pipeline indispensable to the expansion of the industry to now suggesting it won't really make a difference.

A State Department environmental review actually backed up the latter assessment, saying the Canadian oilsands would likely keep growing at a similar rate — with or without KXL.

However, environmental groups have questioned the credibility of the study. They drew attention to one news report Wednesday that suggested the State Department had wildly overestimated the use of rail to transport oil from Canada.