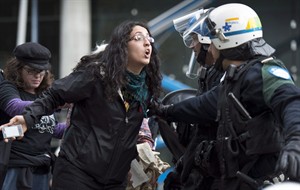 A woman yells at a police officer during a demonstration against the application to reverse Enbrige's Line 9 pipeline on October 10, 2013 in Montreal. THE CANADIAN PRESS/Paul Chiasson

TORONTO - The National Energy Board issued a green light Thursday to energy giant Enbridge's plan to reverse the flow and increase the capacity of a pipeline that has been running between southern Ontario and Montreal for years.

The 141-page decision on the controversial Line 9 comes some four months after the federal regulator held public hearings on the Calgary-based company's proposal.

"The board's decision enables Enbridge to react to market forces and provide benefits to Canadians, while at the same time implementing the project in a safe and environmentally sensitive manner," the NEB said in a statement.

"Enbridge will be permitted to operate all of Line 9 in an eastward direction in order to transport crude oil from Western Canada and the U.S. Bakken region to refineries in Ontario and Quebec."

The approval is subject to a number of conditions, which include Enbridge (TSX:ENB) being required to undertake activities involving pipeline integrity, emergency response and continued consultation with stakeholders and the public.

The board also requires Enbridge to apply for leave to open the reversed Line 9.

The board was not unanimous, however, in the conditions it set out for Enbridge related to financial ability to deal with a spill, with one member saying he would have liked Enbridge to be required to demonstrate that it has "legally enforceable access to financial resources which are and will continue to be adequate to fund any reasonably foreseeable NEB-regulated obligations which arise as a result of a spill."

Ultimately, however, the board found that the Line 9 proposal was "in the public interest."

"The board has imposed conditions that will enhance current and ongoing pipeline integrity, safety and environmental protection measures to which Line 9 is already subject," the NEB wrote in its conclusion.

"It is now up to Enbridge to fulfil its commitments and satisfy the Board’s requirements."

Enbridge said it was already working on a plan to fulfil those requirements, saying the NEB's approval will allow "reliable, competitive North American crude oil" to be delivered to refineries in Ontario and Quebec.

"The benefits of the reversal of Line 9B are clear," said Enbridge CEO Al Monaco. "We've listened carefully and we're acting on stakeholder input to address concerns and further enhance safety. The approval of this project is not the end of the process for us."

The board's decision — which does not require further approval from the federal government — was welcomed by the natural resources minister, who said the NEB had conducted "an independent, scientific review" of Enbridge's proposal.

Line 9, built in 1976, originally shuttled oil from Sarnia, Ont., to Montreal, but was reversed in the late 90s in response to market conditions to pump imported crude westward. Enbridge had asked the board to allow the flow towards the east once more.

The company plans to move 300,000 barrels of crude oil per day through the line, up from the current 240,000 barrels, with no increase in pressure.

It also asked for permission to move different types of oil, including a heavier form of crude. The board granted permission for the change in product.

Enbridge has stressed, however, that the mix of light crude and processed bitumen it plans to run through the line is not a raw oilsands product and will not erode the pipe.

Opponents, however, have argued Enbridge's plan for the aging Line 9 puts communities at risk, threatens water supplies and could endanger vulnerable species in ecologically sensitive areas.

"People have serious concerns about the safety of this pipeline because it's old and leaky," said Gillian McEachern a spokeswoman for Environmental Defence, which had called on the NEB to require Enbridge to carry out hydrostatic testing, which uses water to check for cracks and breaches.

The NEB did not make that a condition of its approval, but it did leave the door open to the test being carried out in the future.

"Our process for reviewing major pipeline projects is seriously broken. This decision puts people across Ontario and Quebec at serious risk of oil spills," said McEachern.

"If there is a spill, tarsands oil is much harder to clean up and more expensive to clean up than conventional oil that's going through it now."

Advocacy group Rising Tide Toronto, which also made submissions to the NEB, reacted to the board decision by calling for "civil disobedience to protect communities, land, and water from tarsands and fracked oil in the pipeline."

"A spill from Line 9 is a matter of where and when, not if it will happen," said spokeswoman Shirley Ceravolo.

Enbridge has insisted that safety is its top priority and has characterized the scope of the reversal as "actually very, very small."

But Line 9's opponents have often pointed to an Enbridge spill in Michigan, which leaked 20,000 barrels of crude into the Kalamazoo River in 2010. There are concerns the same thing could happen in Ontario or Quebec.

A portion of the line has already received approval for reversal and has been sending oil from Sarnia to North Westover, Ont. — about 30 kilometres northwest of Hamilton — since August.