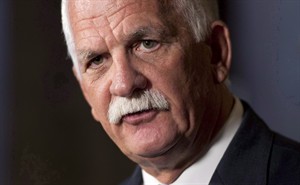 Public Safety Minister Vic Toews responds to a question during a news conference in the Foyer of the House of Commons on Parliament Hill Wednesday May 8, 2013 in Ottawa. A tweet from the Law Society of Manitoba says Toews has been named to the province's Court of Queen's Bench. THE CANADIAN PRESS/Adrian Wyld

OTTAWA - Vic Toews, whose time as one of Stephen Harper's tough-on-crime cabinet lieutenants earned him a reputation as a bare-knuckled partisan fighter, has been named to the Manitoba Court of Queen's Bench.

Long touted for a judicial appointment, Toews was formerly a Manitoba Conservative cabinet minister when he ran and won federally in the riding of Provencher in 2000 as a Canadian Alliance candidate. He was re-elected four times as a Conservative.

But it was during his tenure in cabinet — Prime Minister Stephen Harper made him justice minister in 2006, president of the Treasury Board the following year and public safety minister in 2010 — where Toews earned his notoriety.

"Vic Toews is a symbol of everything that's wrong with this government's attitude towards ethics," said NDP critic Charlie Angus, who described the appointment as "really questionable."

"I will decline to comment on that matter," the Liberal MP said Friday. "I don't comment on the judiciary and my mother always said, 'If you can't say something nice, better not to say anything at all.'"

A champion of the Conservative tough-on-crime ideology, Toews pushed mandatory minimum sentences and promoted a stringent Internet law that would have granted police broader powers, including forcing Internet service providers to surrender subscriber information without a warrant.

The bill sparked loud opposition and was eventually abandoned.

During the wrangle over that bill, a Liberal party worker posted embarrassing documents on the Internet with details of Toews's divorce. He and his wife of 30 years split after it was discovered he had fathered a child with another woman.

The offending staffer was fired.

Toews began his law career with the Manitoba Department of Justice. He was a Crown attorney and also served as director of constitutional law.

On the Court of Queen's Bench, he replaces Justice D.P. Bryk, who elected to become a supernumerary judge last month.