The openness vaccine: a cure for public cynicism

It’s tough to be a political leader today. Once upon a time, people looked up to politicians. Now … well, not so much. Just ask Alison Redford. She’s the latest casualty of a public distemper that can kill or cripple a leader before s/he realizes what’s hit her.

Public mood-swings like this one are a growing occupational hazard. They start with a simple meme that the leader is too top-down, too controlling, too secretive, too insulated, too fond of entitlements.

If this sticks, as it did with Redford, your days as a leader are numbered. Smart leaders are therefore looking for ways to inoculate themselves against it. There is an experimental vaccine. It’s called Open Government.

Openness is something we all understand. When we say someone is open, we attribute three basic traits to them. The person is:

Openness is what happens when these three traits work together. One or two of them is not enough. Imagine a partnership where Jill always listens to Bob, thinks hard about what Bob says, but then always refuses to tell Bob how she feels about what he says.

Eventually, Bob will conclude this is not a real partnership because something vital is always hidden. There is no real openness and, as a result, any bonds of trust will start to disappear.

Openness thus is a complex thing. It is also closely linked to trust, and both are basic conditions of healthy relationships—including that between citizens and their government(s).

So how do people respond when asked whether they think government is open? Mostly they laugh or snarl dismissively. The idea strikes them as ridiculous. Why? Because they believe government lacks all three of these traits.

It is certainly not welcoming, but more like a maze they are forced to navigate.

Nor does it listen well. When they have views they want to express, say, through a petition or at a town hall, they are skeptical that anyone is really listening or that anything will change.

Finally, far from forthcoming, they see governments as highly secretive and controlling.

I’ve been convinced for years that this lack of openness is eroding public trust. Then I came across the following slide by Frank Graves of Ekos Research. Over the last half-century, it shows a striking decline in the levels of trust that Americans and Canadians feel toward their national governments: 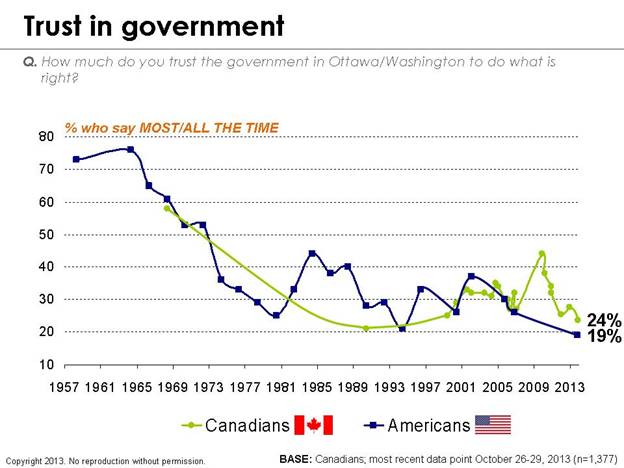 Of course, the fact that trust in government has declined steeply is not automatically bad. Perhaps our grandparents were too deferential and trusting of government and current generations have become more discerning—which would be a good thing.

While there is truth in this, I don’t believe it is the whole story—or even the main story. When people say they don’t trust government, they mean they don’t know how and why decisions are made; and they fear that too often it is not to promote the public interest. The trendline thus reflects growing public cynicism, rather than critical engagement.

Furthermore, this cynicism is now fuelling other trends. For one thing, it means the public has an increasingly low tolerance for privilege, secrecy, and top-down leadership. Hence the dramatic collapse in Redford’s polling numbers.

I believe distrust and cynicism are also linked to growing volatility in the electorate. Along with lack of trust comes lack of commitment and attachment—especially to political parties and leaders.

Finally, I think distrust and cynicism is linked to falling voter turnout—especially among young people, who consistently report that they don’t think their views or their vote make a difference. They see government as too remote and out of touch.

So what can be done to reverse these trends? Can we rebuild trust? Actually, yes, and the way forward is not hard to find. As any good therapist knows, the right response to lack of trust is usually openness. Whether we are talking of damaged friendships, business partnerships, or marriages, when trust has been lost, openness is often the cornerstone on which to rebuild it.

The same goes for government. If public trust is gone, rebuilding it begins with openness. But to be effective this can’t be a token or partial response. It must be robust and it must include all three traits.

Open Government is such a response:

Many political operatives will be rolling their eyes at this. Politics and government just don’t work that way, they will say—and they are right. They do not.

But I believe a sea change is underway in politics and government. The rise of social media and other digital tools are rendering old-style secrecy, information control and top-down decision-making obsolete.

Soon it will be impossible to govern this way. Leaders who don’t learn this lesson now will end up on the ash heap of history. Just ask Alison Redford.

Readers of this column may know that I have been leading a panel on Open Government for the Government of Ontario. Our report will be released next week and I will have something to say about our particular recommendations then.

Dr. Don Lenihan is Chair of the Ontario Open Government Engagement Team and Senior Associate at Canada’s Public Policy Forum in Ottawa. He is an internationally recognized expert on democracy and public engagement, accountability and service delivery. Don’s latest book, Rescuing Policy: The Case for Public Engagement is an introduction to the field of public engagement, a blueprint for change, and a sustained argument for the need to rethink the public policy process. The views expressed here are those of the columnist alone. Don can be reached at: Don.Lenihan@ppforum.ca or follow him on Twitter at: @DonLenihan