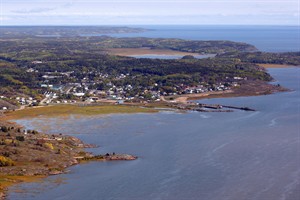 An aerial view of Fort Chipewyan is seen on Dec. 15, 2010. THE CANADIAN PRESS/Jeff McIntosh

EDMONTON - A study by the Alberta government says an aboriginal community downstream from the oilsands doesn't have higher overall cancer rates.

The Alberta Health Services survey, which used data from 1992 to 2011, did find the prevalence of two kinds of cancer in Fort Chipewyan was higher than would be expected.

James Talbot, chief medical health officer, says relatively high levels of cervical and bile duct cancer are most likely to be attributable to other factors than environmental contamination.

"Overall, cancer rates in the region are what would be expected for the rest of Alberta," he said Monday when the survey was released.

Leaders in Fort Chipewyan reacted to the report with suspicion. They said a statistical analysis of data that already existed doesn't fulfil their requests for a full-blown health study.

"There's nothing (here) in regards to a comprehensive, independent study that we've been requesting, where government and industry have no participation in it," said Chief Allan Adam of the Athabasca Chipewyan First Nation.

"The government of Alberta has consistently downplayed the significance of cancer in my community," he said. "They have done that again today in their reports to the media that there is no reason for alarm of increased levels of cancers in my community."

Potential health impacts on people living downstream of the oilsands are a common concern for local residents and for industry critics. Fort Chipewyan's concerns surfaced recently in Washington, D.C., when they were discussed at a hearing hosted by a Democratic senator who opposes the Keystone XL pipeline from Alberta to the Texas Gulf Coast.

The government survey compared the incidence of 81 cases of 18 different types of cancer to the Alberta average.

Bile duct and cervical cancer rates were high enough above average to be statistically significant.

Most cervical cancer is caused by a virus and U.S. research shows only weak links between bile duct cancers and environmental toxins, said Talbot.

"There's only weak evidence for that to be associated with bile duct cancer and there are a lot of other, stronger-linked ones that we can do something about in the community."

He added that cancer rates in Fort Chipewyan's children under 15 are low, which also suggests environmental contamination isn't a significant factor because children are more sensitive to it.

There's also some initial evidence to suggest that aboriginals suffer from bile duct cancer at a higher rate than average, Talbot said.

The chief medical health officer did acknowledge that people in Fort Chipewyan are probably correct in their feeling that cancer is becoming more common. Rates of the disease are gradually rising everywhere, partly because the population is getting older, Talbot said.

"The perception is that there's more cancer and to some extent that's correct, but it's not unique to this community."

Chief Adam and Alberta Liberal Leader Raj Sherman said the survey was too limited in its approach.

Both Sherman and Adam are calling for a comprehensive Fort Chipewyan health study to be conducted by a group independent of industry and government.

The government had commissioned such a study, but the chief and council for one area band backed out over fears it wouldn't be independent. The band also wanted assurances it would focus on cancer rates and would include a baseline health study, neither of which it got.

The Athabasca Chipewyan has since commissioned its own health review. Adam said it should be released soon.

The government study was quickly released Monday in Edmonton after the Alberta Liberals obtained a copy of it through access-to-information legislation.

Alberta Health Services had planned to share it first with the community, but a meeting to do that was cancelled after the government refused to give advance copies of the survey to the First Nations involved, said an Athabasca Chipewyan band spokeswoman.

Courtoreille was angry the survey was released to reporters before his community had a chance to look at it.

"Health Minister (Fred) Horne had promised to get us a copy of the report prior to releasing of these statistics and that didn't happen."