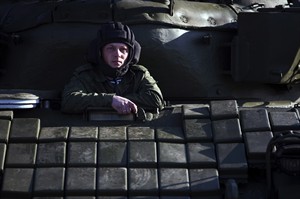 OTTAWA - Foreign Affairs Minister John Baird says he hopes Russia has seen the "virtue" of diplomacy to resolve the crisis in Ukraine, while a defence expert warns that Canada should be paying more attention to Russia's claims in the Arctic.

"We believe that Russia has apparently now seen the virtue of a diplomatic pact and equivalent steps in positive action," Baird said at a joint news conference with Moldova's foreign minister.

"Frankly speaking, the actions of the Russian Federation will speak more loudly than its words."

He again called on Moscow to withdraw troops from Crimea and along the borders of eastern Ukraine.

Russia laid out a tough set of conditions for a diplomatic settlement, proposals that would radically alter the way Ukraine is governed and administered by making regions more autonomous.

Baird met with a series of senior government ministers in Moldova, a country squeezed between Ukraine and Romania, and assured them Canada strongly believes in the country's territorial integrity.

But defence expert Rob Huebert of the University of Calgary says the Harper government should be paying closer attention to Canada's own yet-to-be-defined border with Russia in the Arctic.

His warning comes after a published report in Moscow last week saying further militarization in the Arctic that would challenge Russia's pre-eminence in the region is a "red line" that the West dare not cross.

Canada and Russia have competing interests in the Far North, especially in resource development. The stakes were raised when Prime Minister Stephen Harper last year ordered that Ottawa's presentation to a United Nations panel on boundaries in Arctic be updated to include a claim to the North Pole.

Although the two nations — as well as several other Arctic countries — are engaged in an international process, Huebert said Putin's recent annexation of Crimea in defiance of international law raises the question of whether Russia would respect a border decision that doesn't go in its favour.

"You have an increasingly isolated Russia that has identified the Arctic region as one of their core strategic interests," said Huebert.

"You have to ask the question: If they've been kicked out of the G8 and humiliated, are they going to keep playing by the rules of the international community, if they think this is costing them substantial resources?"

Putin has made a priority of beefing up Russia's military presence in the Arctic — something Huebert says many experts have blithely dismissed as posturing for a domestic audience.

The take away from the Ukraine crisis is that Russia must be taken seriously and as a consequence, he says, the Harper government should take a closer look at its own military plans in the Arctic.

"We have to start re-examining some of the hairball assumptions that we have," said Huebert.

The navy is in the process of constructing up to six lightly-armoured Arctic patrol ships that will perform — by the government's own acknowledgment in internal documents — a policing role.

It also has no submarines capable of operating under the ice, and there is limited surveillance in the region because plans for drones and satellites that can peer through the clouds are either delayed or on hold.