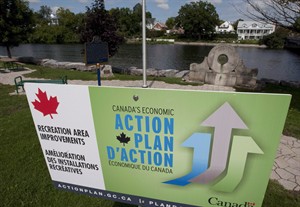 In 10 public-opinion surveys since 2009, Canadians were asked whether they took any action as a result of seeing ads placed with newspapers, TV, radio and the Internet on the benefits of the Economic Action Plan, the catch-all Conservative government brand.

Results have been in sharp decline in recent years, with only a tiny fraction of those polled in 2013 saying they visited the EAP website or called a toll-free number, as the ads urge.

And so the Finance Department now has eliminated the question altogether, along with three other questions that asked Canadians to rate the government's performance. There, too, the numbers had been dropping to new lows.

"The common measurement tool is periodically revised and was most recently modified last fall, in order to streamline data collection to questions most useful in assessing a campaign's objectives — notably recall, recognition and message retention," department spokesman Jack Aubry said in an email.

The Finance Department paid pollster Harris Decima almost $31,000 to conduct a truncated survey of 2,000 Canadians in early November about their reactions to a pair of 30-second TV ads and two radio ads.

The ads' content was described in detail to respondents, but as few as 13 per cent recalled seeing or hearing the action-plan spots, which ran between Oct. 7 and Nov. 3 last year.

And there was no data collected on any specific actions respondents might have taken in response to the ads, or on their rating of the government's performance, because those questions were quietly dropped from the survey.

The Conservative government ran yet another set of action-plan ads between Feb. 17 and March 31 this year, following the Feb. 11 budget. Aubry confirmed there are no survey questions being asked about any actions taken or about government approval ratings.

Previous Finance polls have showed the government's approval ratings in decline, from the mid-40 per cent range initially in 2009 to about 38 per cent in the last two surveys in April and June last year.

Dropping the key survey questions has also eliminated any snarky comments previously recorded by the pollsters, including claims the ads were a "waste of money" and represented "propaganda," cited in an April 2012 survey.

The opposition parties and even some conservative commentators have called the action-plan ads thinly disguised propaganda. Editorials at major news organizations, including the National Post and the Globe and Mail, have said the ads are a waste of taxpayer dollars, designed to promote the Conservative party with public money.

Finance Canada paid Acart Communications Inc. almost $15 million to run TV, radio and Internet ads for the Economic Action Plan in 2012-2013, the latest year for which statistics are available.

The department set aside a $10-million action-plan ad budget for 2013-2014. Aubry would not provide actual costs for the year, saying the numbers would be published eventually.

The Finance Department also commissioned a series of focus groups last October to provide feedback about Canadians' impressions about the government's management of the economy.

"There was minimal unprompted recall of the Economic Action Plan (EAP) beyond vague references to having seen or heard 'an ad'," says the report.

"When participants were further pressed for recall of any specific EAP measures, few could answer."

"In an uncertain global economy, it is important that Canadians are aware of the measures and programs in the EAP and how they will lead to jobs, growth and long-term prosperity," he said.

"The advertising campaign highlighted key policies and initiatives flowing from the EAP."

The department has spent at least $383,000 since 2009 polling Canadians on their reaction to Economic Action Plan ads.