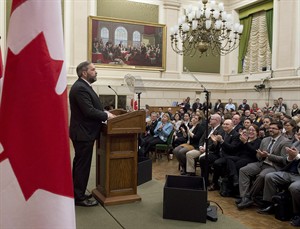 OTTAWA - A parliamentary committee has been given three days to debate and vote on nearly 300 amendments to a controversial overhaul of Canada's elections law — a tight time frame the Opposition NDP is calling a "farce."

The Conservative majority has set 5 p.m. Thursday as the deadline for clause-by-clause debate of the 242-page bill, which now includes almost 300 pages of proposed amendments.

That includes 45 changes proposed by the government itself late last week to address some of the most contentious reforms.

"This is more of the farce," New Democrat David Christopherson groused as the final witness hearing wrapped up Monday.

"We've got 242 pages, 300 pages of amendments, and we're going to have until five o'clock (Thursday) and we're not even meeting around the clock to do it. This is insane," he said.

"Some of the insanity was two or three days taken up with a filibuster," responded Joe Preston, the Conservative committee chairman, before dropping the gavel to end Monday's hearing.

Preston was referring to Christopherson's own procedural filibuster over the legislation.

In fact, it's been more than a year since the Conservative government first promised to present election reforms, only to withdraw them — unseen by the public — after objections from party MPs.

"In our desire to rapidly incorporate recent recommendations made by the chief electoral officer, we discovered a last-minute issue in the proposed Elections Reform Act," Tim Uppal, the former democratic reform minister, said last April.

"Therefore, we are postponing the introduction of legislation. We will take the time necessary to get the legislation right."

Uppal lost his job to Pierre Poilievre in a July 2013 cabinet shuffle and it wasn't until February 4 this year that a new bill emerged, rechristened the Fair Elections Act.

The government then used time allocation to rush the legislation out of the Commons and into committee, saying it had to be passed into law by the end of June in order to be ready for the 2015 election period.

"The opposition seems to suggest that by limiting debate, you're actually going to be destroying democracy and not allowing this bill to be fully examined," Tom Lukiwski, Poilievre's parliamentary secretary, said in February when the government first closed off debate on the bill.

"Hogwash. It gets examined at committee."

That committee wrapped up witness testimony Monday by hearing from Brian Saunders, the director of public prosecutions, who was just the latest parliamentary officer to say he was not consulted during the drafting of the bill — notwithstanding the year-long pause to get it right.

And on Friday, after weeks of insisting there was nothing wrong with the bill, Poilievre announced that significant portions of C-23 would be deleted or amended.

"We brought forward a common sense bill and we've accepted some reasonable amendments to it," Poilievre told the House of Commons on Monday in question period.

The minister has ruled out further changes, such as the return of voter vouching, which could suggest the committee's deliberations this week are moot.

That didn't stop NDP Leader Tom Mulcair from touting a victory of sorts on the elections bill.

"We said we'd join democrats of every stripe to fight this bill in the courts, if we had to," Mulcair told his MPs in an election-style speech Monday morning as Parliament resumed following a two-week break.

"And thanks to our hard work, Conservatives are now saying they'll back down. We'll wait to see the fine print."

That fine print is found in the clause-by-clause examination at committee that begins Tuesday, with sessions in the morning and evening, and wraps up Thursday afternoon. Voting on amendments can continue after the 5 p.m. deadline but no further discussion or debate at committee will be permitted.