Not a ‘mess,’ Kenney says of job bank 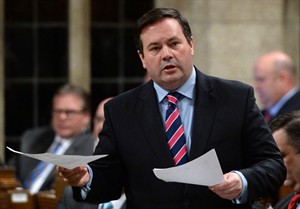 Minister of Employment and Minister of Multiculturalism Jason Kenney responds to a question during question period in the House of Commons on Parliament Hill in Ottawa on Monday, May 12, 2014. THE CANADIAN PRESS/Sean Kilpatrick

OTTAWA - The federal government will soon make enhancements to its online job bank amid revelations that hundreds of positions posted on the site have long since been filled, Employment Minister Jason Kenney said Monday.

"We are making improvements to the Canada Job Bank ... we will be using new technological developments in the near future to ensure an even better matching of unemployed Canadians with available jobs," Kenney said in the House of Commons.

The government will work with "private-sector web platforms" when provinces fail to send their own postings to the job bank, he added. Currently, most provinces and territories do so automatically.

The government also relies in part on job bank data to determine what regions of the country are clamouring for labour.

But from customer service representatives in New Brunswick to food service supervisors in B.C. and RCMP clerks in Saskatchewan, many of the 110,000 jobs listed on the job bank are no longer available. A litany of postings are several months old; some have been on the site for more than a year.

Some job-seekers also complain that they never heard back from employers after applying for jobs posted online. An email address set up under a generic name by The Canadian Press has not received any replies to multiple queries about various job postings, including at companies that already employ temporary foreign workers.

Bill Wadsworth, a helicopter pilot in B.C., says he applied for jobs at numerous companies that he later learned were given a positive labour market opinion — or LMO — that allowed them to hire temporary foreign workers.

"I had applied to, and had the qualifications, to work for 75 per cent of the LMOs," he said in a recent interview.

"During my job search, I would contact these companies every two weeks on average. The response was always the same: 'We have no openings.'"

Wadsworth said he now views the job bank with cynicism.

"The companies hiring the foreign workers have discovered that all they need to do is post a job online, wait a few weeks and then tell the government they had no Canadian applicants," he said.

"Regardless of how many resumes they receive, they know there are no government checks in place."

The NDP's Jinny Sims, the party's immigration critic, said the existence of outdated postings on the job bank is just another example of the government's shoddy labour market data.

"Time and again the minister points to job vacancy numbers from the Canada Job Bank, data that is used to determine labour market opinions," she said.

"However, that data is often old and postings are not removed when filled. In other words, decisions to permit temporary foreign workers are based on false information.... Some post ads in the jobs bank just to qualify for the program."

Kenney, however, praises the site. He has said it receives seven million hits a month from job-seekers and that thousands of Canadians have signed up in the last two years to be notified about openings.

"The truth is that the site is a useful platform to connect unemployed Canadians with available jobs," he said.

"It does not matter how many Canadians go on the site if the site does not work," he said. "We know the site is so poorly maintained, so outdated, that job-seekers across the country are facing huge frustrations."