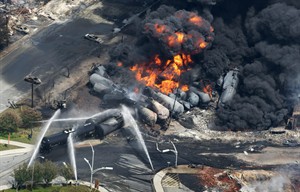 The prosecutor's office said on Monday that 47 counts of criminal negligence causing death have been filed against Thomas Harding, Jean Demaitre and Richard Labrie as well as the Montreal Maine and Atlantic Railway Ltd., the insolvent railway firm at the heart of the disaster.

The explosion occurred after a runaway train hauling tanker cars loaded with volatile crude oil broke loose and barrelled into the town in the early morning hours of July 6, killing 47 people and destroying part of the tiny Quebec community's downtown.

Rene Verret, a spokesman for the Crown, says the three men were placed under arrest late Monday afternoon by police.

They will appear in court on Tuesday in Lac Megantic, Que., where they will face the charges, Verret said.

All three were employees of the railway company.

"Mr. Harding was the driver, Mr. Labrie was the railway traffic controller and Mr. Demaitre was the manager of train operations," Verret told The Canadian Press late Monday.

In late March, a Crown spokesman said the province's director of criminal and penal prosecutions had begun a review of the file.

In a statement released late Monday, the Crown said that it elected to file the charges after an analysis of the evidence gathered at the scene.

Federal Transport Minister Lisa Raitt issued a brief statement on behalf of the federal government in which she thanked Quebec provincial police for their investigation.

"I understand that this is difficult for those affected by the tragic incident in Lac Megantic," she said, adding there would be no further comment as the case is before the courts.

The MM&A railway company is in the process of being sold. In January, bankruptcy judges in Quebec and Maine approved the sale of the insolvent railway to Railroad Acquisition Holdings LLC, an affiliate of New York-based Fortress Investment Group, for US$14.25 million.

Verret said the Crown had hoped to announced the charges earlier, but had a number of steps to go through before making a formal announcement.

"We had to do so much today — we had to get warrants for three people and for the company and then we had to find these people," Verret said. "And of course we had to also inform the families in Lac-Megantic and the person in charge there."

Coincidentally, a news conference is planned in Lac-Megantic on Tuesday involving the rebuilding of the Musi-Cafe, the establishment in the heart of town where many people perished.