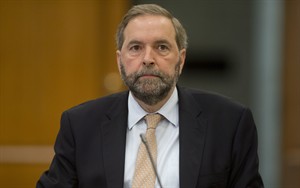 OTTAWA - Tom Mulcair stood his ground Thursday throughout an unprecedented two-hour grilling by a Commons committee over the NDP's allegedly improper use of parliamentary resources.

The NDP leader was at times contemptuous of his Conservative and Liberal tormentors, but managed to keep his temper in check as he insisted — repeatedly — that New Democrats have done nothing wrong.

Nothing he said persuaded Tory and Liberal MPs on the procedure and House affairs committee, who continued to allege the NDP has been using taxpayers' money to pay for partisan activities, in violation of parliamentary rules.

But none of their questions elicited any new ammunition with which to target the NDP.

"In seven years sitting on this committee, I have never seen a witness as evasive as this witness," said Conservative MP Stephen Woodworth, a lawyer who handled the questioning from the government side.

"In my 36 years in government, Mr. Woodworth, I've never seen the governing party get together with its handmaiden in the third party to convene (an interrogation of) the leader of the Opposition," shot back Mulcair, dismissing the spectacle as a partisan kangaroo court.

The two-hour stand-off marked the first time in Canadian history that an opposition leader has been ordered to testify at a committee, according to the Library of Parliament.

Committees are ordinarily the forums in which MPs examine legislation and hold the government to account. But the Conservatives last month employed an obscure procedural manoeuvre to pass a motion in the Commons ordering Mulcair to appear at committee.

And they may yet force him to reappear. At the end of Mulcair's two hours on the hot seat Thursday, Tory MP Tom Lukiwski served notice of a motion to expand the committee's study of the NDP's spending practices, including calling Commons clerk Audrey O'Brien and potentially recalling Mulcair, if necessary.

Thursday's grilling was prompted by Liberal and Conservative complaints that New Democrats improperly used their Commons budgets to pay staff in satellite party offices in Montreal, Quebec City and Toronto and used their free postal privileges to send bulk partisan mailings into four ridings that were in the midst of byelection campaigns late last year.

On the satellite offices, Mulcair was adamant that the employees — 10 in Montreal, two in Quebec City and two in Toronto — have been engaged solely in furthering the parliamentary agenda of NDP MPs. Although housed in offices paid for by the party, he said their work was strictly segregated from partisan workers.

The secretive, all-party board of internal economy last month issued a new bylaw prohibiting the use of Commons office budgets to pay the salaries of employees who work out of offices paid for by a political party.

Mulcair said the fact that the board had to come up with new bylaw to stop the practice is "conclusive proof" the NDP had been doing nothing wrong prior to that.

"I'm sure that the member is not suggesting that through his retroactive, retrospective reflections, we're somehow bound by something that didn't exist at the time," he told Woodworth at one point.

Since the new bylaw was imposed, the 14 NDP staffers who had been working in the satellite offices have been working out of their homes. They are still on the Commons payroll.

Liberal MP Sean Casey said the bylaw was effectively "an injunction," created to stop the NDP from continuing to flout parliamentary rules, which allow an MP to use parliamentary resources to pay for staff on Parliament Hill or in a constituency office — not anywhere else.

However, Mulcair cited other provisions, which he said establish that MPs, and by extension their staff, are "allowed to work wherever we want, whether that work is partisan in nature or not."

Documents provided to the committee by the Commons administration suggest otherwise. O'Brien states in one that administrators had no idea the staffers were not working in Ottawa, contrary to Mulcair's repeated assertion that the arrangement had been approved by officials.

Casey asked Mulcair to explain minutes of an October 2011 meeting which recount an NDP official specifically telling administrators that the staffers were working "in Ottawa."

"That's an interesting question because it's so comically loaded it's worthy of nothing but contempt," Mulcair responded.

He argued that "there are no minutes" taken during the meeting and that the document Casey referred to is someone's recollection three years after the fact. And he insisted the NDP was always open and transparent with administrators about the arrangement.

On the bulk mailings, Mulcair hauled out examples of partisan missives sent by Conservative and Liberal MPs, using their free postal privileges.

"Look, this is what you do and that's what we do. We all do it. Don't (deny it), Mr. Woodworth. You're not dignifying yourself," he said, adding that the NDP will continue to send out such bulk mailings.

"Sorry, we're not going to roll over if the others are allowed to use these techniques. The Conservatives invented it."

Elections Canada, at the internal economy board's request, has looked at the mailings in question and concluded it has no authority over missives posted before the byelections were called — which the NDP insists was the case, although some arrived in mailboxes after the writ had dropped.

The board has sent Elections Canada more details about the mailings and asked that the agency take another look at the matter.

It continues to investigate the NDP's satellite offices and may yet demand that the party reimburse the Commons for the salaries paid to the staffers in those offices — a not insignificant sum.

"Just pay the taxpayers back. Do the right thing," he urged Mulcair.