Railroad wants to send oil into Lac-Megantic after fixes 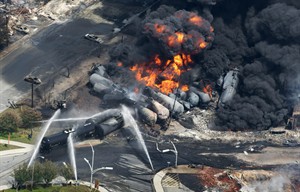 FILE - In this July 6, 2013 photo, smoke rises from flaming railway cars that were carrying crude oil after it a train derailed in downtown Lac Megantic, Quebec, Canada. A large swath of the town was destroyed after the derailment, sparking several explosions and fires that claimed 47 lives. John Giles, top executive of Central Maine and Quebec Railway, that purchased the railroad responsible for the derailment, said Friday, May 16, 2014 that they plan to resume oil shipments after track safety improvements are made. (AP Photo/The Canadian Press, Paul Chiasson, File)

PORTLAND, Maine - The company purchasing the assets of a railroad responsible for a fiery oil train derailment that claimed 47 lives in Quebec plans to resume oil shipments after track safety improvements are made, the firm's top executive said Friday.

John Giles, president and CEO of Central Maine and Quebec Railway, said he hopes to have an agreement with Lac-Megantic officials within 10 days that would allow the railroad to ship nonhazardous goods, restoring the vital link between the railroad's operations to the east and west of the community.

The company plans to spend $10 million on rail improvements in Canada over the next two years with a goal of resuming oil shipments in 18 months, he said.

"In the interest of safety, and I think being sensitive toward a social contract with Lac-Megantic, we have chosen not to handle crude oil and dangerous goods through the city until we've got the railroad infrastructure improved, and made more reliable," he told The Associated Press.

The oil industry is relying heavily on trains to transport oil in part because of oil booms in North Dakota's Bakken region and Alberta's oilsands.

In July, a train transporting oil from the Bakken region was left unattended while parked near Lac-Megantic. The train came loose and sped downhill into the town, where more than 60 tank cars derailed and several exploded. The accident killed 47 people and destroyed much of the town.

The news that Central Maine and Quebec Railway is already talking about resuming operations upset Yannick Gagne, owner of the cafe-bar that was at ground zero of the tragedy.

"People are still in distress, in pain, facing financial problems and we're talking about the train company starting up," the owner of the Musi-Cafe told The Canadian Press on Friday.

"We're still in survival mode, we have no revenue."

Gagne said he and others in the devastated section of the town, which still smells of tanker oil, continue to struggle to survive.

"I find it deplorable that we're surviving with the help of the Red Cross, with small amounts every week," he said.

"I get a small sum every two weeks that I have a right to for my family — there are six of us at home. Lucky I have that because I have nothing else."

Gagne said he doesn't even know if he'll be able to rebuild his restaurant-bar because he still needs several hundreds of thousands of dollars.

Gagne also said residents will be very angry when they find out the new railway is already talking about moving tankers through the town again.

"The regular transport of goods, yes that's acceptable if they pay attention," he said. "But already to talk of oil and nothing has been done here, people will be very,very mad."

In a later statement, Giles stressed it is the railway's "desire and intent not to handle any dangerous goods — including crude oil — until improvements have been made to its infrastructure."

He also said it isn't even certain there will again be a demand for that type of goods on CMQ railroads.

"In fact, clients with such needs in the past either found new sources of supply, or other ways to fulfil their dangerous goods transportation needs since then," Giles said in the statement.

Three men now face 47 charges of criminal negligence causing death in connection with the accident. Thomas Harding, Jean Demaitre and Richard Labrie each had to post $15,000 bail this week and were freed on various conditions pending their next court appearance on Sept. 11.

But Giles said the company can transport that crude safely — and he intends to convince the people of Lac-Megantic.

"I want to get the railroad in position that by January 2016 that I can at least begin to compete for potential crude business moving east-west," Giles said in The Associated Press interview.

In an email, a spokesman for the Prime Minister's Office said, "Any plan the company has should take into account the tragedy the people of Lac-Megantic have gone through and should be done in collaboration with the administration of the city."

A spokesman for Lac-Megantic said Roy Laroche would have no comment.

New York-based Fortress Investment Group was the winning bidder for the assets of Hermon, Maine-based Montreal, Maine and Atlantic Railway, which declared bankruptcy after the disaster. The new railroad, Central Maine and Quebec Railway, closed on the sale of U.S. assets Thursday and is expected to close on the Canadian assets in a couple of weeks.

Giles made his comments Friday in a telephone interview from Bangor, where his company had called former Montreal, Maine and Atlantic workers for a two-day meeting to talk about safety and operations.

He said the rail is in tough shape, with speeds reduced to about 15 km-h in many sections in Canada. He said the goal is to improve the track to safely increase train speeds to 40 km-h. He also said he has no plans to operate trains with a single crew member.

He said he intends to move slowly, working with Lac-Megantic leaders, because he understands the community's concerns.

Giles hopes to convince the people of Lac-Megantic that the rail is safe enough for shipments of so-called "dangerous goods" by this fall. He said he wouldn't press for crude oil shipments until later.

"The railway is important to the community, people, jobs and commerce. We believe and we've proven ... that we can handle every type of commodity safely and efficiently," he said.

Federal Transport Minister Lisa Raitt pointed out that her department was not involved in the agreement between Montreal Maine and Atlantic Railway and Lac-Megantic which saw rail operations resume in late 2013.

"I continue to follow this matter very closely," she wrote in an email. "As this is a matter between a private company and the municipality, it would be inappropriate to comment further."

--With files from Peter Rakobowchuk in Montreal