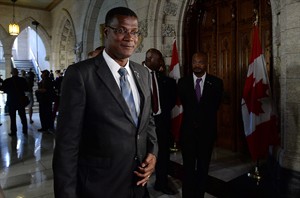 Rufus Ewing, Premier of the Turks and Caicos, leaves after holding a media availability in the Foyer of the House of Commons on Parliament Hill in Ottawa on Monday, May 26, 2014. THE CANADIAN PRESS/Sean Kilpatrick

OTTAWA - The premier of Turks and Caicos is leaving the door open to the prospect of his country joining Canada, even though he has opposed the idea in the past.

But Foreign Affairs Minister John Baird suggested Monday that Canadians are dreaming if they think they'll have a province in the Caribbean any time soon.

Ewing described the meeting as a "courtship," but said the pair did not discuss the possibility of Turks and Caicos becoming Canada's 11th province.

The idea, however, is not out of the question, Ewing suggested during a news conference following the meeting.

"It is not of my mandate to close the door," he said.

"It is my mandate to see Turks and Caicos have sustainable economic growth and development and development of our people ... and we look to Canada, who has shown by example of being a very strong democracy."

Even creating closer political ties is a long shot, said Baird: the Harper government is not exploring a stronger governmental relationship, let alone considering a plan to annex the British colonial territory.

"We're not in the business of annexing islands in the Caribbean to be part of Canada, so that's not something that we're exploring," said Baird.

"We're not looking at any sort of formal association with the islands."

Some provinces, however, appear open to the idea.

While Ewing was in Ottawa, P.E.I. Premier Robert Ghiz tweeted to Saskatchewan Premier Brad Wall that he'd be happy to partner with the Prairie province on the Turks and Caicos project.

Conservative MP Peter Goldring has been pushing the idea for over a decade, arguing that Canada needs its own Hawaii.

Canada enjoyed strong economic ties with Turks and Caicos in the 1800s, largely through the salt trade.

More recently, however, the 40-island nation has relied more on the tourist trade and its open banking system for the economic well-being of its roughly 30,000 inhabitants.

Turks and Caicos is currently a British territory with an elected legislature.