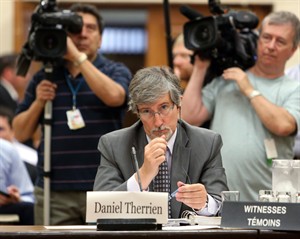 Testifying Tuesday at the House of Commons justice committee, Daniel Therrien again urged the government to split the bill in two to allow for thorough examination of several measures that would expand online monitoring.

The legislation would make it illegal to distribute "intimate images" without consent and remove barriers to getting such pictures scrubbed from the Internet — changes Therrien supports, calling them "largely uncontroversial."

However, the bill also overhauls the existing system of production orders and warrants, and would give authorities new tools to track and trace telecommunications to determine their origin or destination.

Those elements would dangerously lower the proposed threshold for allowing access to personal data, and broaden the range of officials who could use the information beyond police to include mayors, sheriffs, reeves and even airline pilots, Therrien's office warns.

The commissioner, who assumed his post this month, also takes issue with a provision that would grant legal immunity to anyone who voluntarily preserves data or provides a document at an investigator's request without a court's approval.

Finally, he criticizes the lack of accountability measures in the bill, saying agencies should be required to record their use of any new powers.

The government says the bill is needed to bring laws into the 21st century and help authorities catch pedophiles and other criminals lurking online.

Civil libertarians say the cyberbullying bill will erode Internet privacy and make it easier for government to spy on the activities of law-abiding Canadians.

Therrien told MPs the new surveillance measures deserve "very close scrutiny and would benefit from a focused and targeted review."

The bill contains new powers under which sensitive information would become accessible to authorities based on a "reasonable suspicion" of wrongdoing, a standard lower than the constitutional default of "reasonable and probable grounds" to believe an offence has taken place.

For instance, Therrien said, digital transmission data would be available to authorities at the lower threshold, based on the precedent that a record of someone's telephone calls is currently accessible based on mere suspicion.

However, the information comprising "transmission data" as defined in the bill could tell authorities much more than would a record of telephone calls, he said.

"We believe that suspicion is too low a threshold for such potentially revealing information in a digital era when every transaction, every message, every online search and every call or movement leaves a recorded trace."

The investigative powers in the bill would allow not only peace officers, such as police, but "public officers" of various kinds to use the new techniques, Therrien said.

Some of these officials, unlike many police and security agencies, have no oversight or transparency requirements, he said.

"We find this to be of particular concern."

Companies or individuals can currently provide information to government agencies — even when investigators lack a warrant or other judicial approval — without fear of being held liable.

However, Therrien is concerned that the cyberbullying bill would remove the requirement that a criminal offence or a breach of another federal law be under investigation in such cases. He said it would give police complete discretion to ask companies to voluntarily hand over customer data in any circumstances.

"We believe that Canadians expect that their service providers will keep their information confidential and that personal information will not be shared with government authorities without either their express consent, clear lawful authority or a warrant," he said.

Therrien said he's troubled by the absence of obligations in the bill to report on how and when the new provisions would be used, especially given the range of officers who would be able to exercise the powers and the possible effects of extending legal immunity.