Today on the Hill: Citizenship fight in court 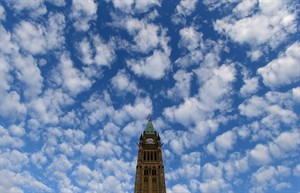 The Peace Tower is seen on Parliament Hill in Ottawa on November 5, 2013. THE CANADIAN PRESS/Sean Kilpatrick

OTTAWA - Should Deepan Budlakoti get his Canadian citizenship back?

That question will be grappled with today as the Federal Court hears Budlakoti's Charter of Rights challenge against Citizenship and Immigration Canada.

The Ottawa-born man was stripped of his citizenship and ordered deported in 2011 as he served time for drug and weapons trafficking.

The federal government has argued that Budlakoti has never been a Canadian citizen because his parents worked for an Indian diplomat when he was born in 1989.

His family and the former high commissioner for India have denied that claim, and his status is in limbo because India refuses to claim him as one of its own.

Here are some other events taking place in Ottawa today:

— Finance Minister Joe Oliver will meet with private sector economists and then speaks with reporters;

— The group Canadian Doctors for Refugee Care, health-care workers and representatives of national health associations will give an updated assessment of how federal cuts have impacted refugee health care;

— And Statistics Canada will release the April report on Canada's international transactions in securities.