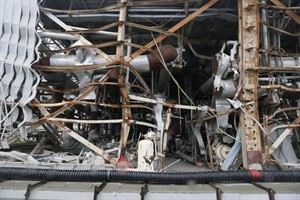 The damaged Unit 4 reactor building at the Fukushima Dai-ichi nuclear power plant is seen in Okuma town, Fukushima prefecture, northeastern Japan in a Nov.7, 2013 file photo. Canada's nuclear watchdog for the first time is proposing that people living near reactors be given a precautionary stock of radiation-fighting pills in case of an accident. The Canadian Nuclear Safety Commission has been reviewing the country's emergency preparedness and response regulations in the wake of the meltdown at Japan's Fukushima reactor in 2011. THE CANADIAN PRESS/AP/Kimimasa Mayama

OTTAWA - Canada's nuclear watchdog for the first time is proposing that people living near reactors be given a precautionary stock of radiation-fighting pills in case of an accident.

But at a consultation meeting Monday in Ottawa, sources in the room said the nuclear power producers expressed reservations about the plan, and how it would be implemented.

The Canadian Nuclear Safety Commission has been reviewing the country's emergency preparedness and response regulations in the wake of the meltdown at Japan's Fukushima reactor in 2011.

Many countries have already adopted a system where residents near nuclear reactors are given iodine thyroid blocking tablets to store in their homes.

The thyroid glands, especially in younger children, are the most susceptible to absorbing radiation that is ingested or inhaled. The pills are supposed to be taken immediately before or after a major radiation leak.

Mass distribution has occurred in New Brunswick and in Quebec, but not in Ontario where the major reactors are located. Pills are available to residents at local pharmacies and stockpiled at schools.

A 2013 focus group conducted for Ontario Power Generation said that among residents surveyed around the Darlington and Pickering nuclear plants, "almost none had obtained free pills that have been advertised in regional communications or pamphlets."

The safety commission has been consulting with various groups, including environmentalists and nuclear licence holders, on its latest regulatory draft.

It is proposing the tablets be pre-distributed within the "plume" area of radiation, of about 10 kilometres. In the Greater Toronto Area, that means about a quarter-million people.

"With the recommendations in terms of KI pre-distribution, it will make emergency management even more effective than it is now," said Patsy Thompson, a senior bureaucrat at the commission.

"People need to feel that living close to a nuclear facility now does not put their health at risk."

Some energy producers have expressed concern about the concept of a mandatory pre-distribution, and have balked at the possibility that the pills be sent out to a wider area beyond the first 10 kilometres. Each extra kilometre into the Toronto area means tens of thousands of residents.

A nuclear safety commission document summarizing the input it received lists Ontario Power Generation as wanting to change the draft to the words "the opportunity for pre-distribution ... will be made."

Bruce Power is listed as recommending "providing KI pills only (for) on-site personnel and having a plan for procurement and distribution of KI pills for the primary zone and municipalities."

Bruce Power did not respond to a request for an interview .But Neal Kelly of Ontario Power Generation emphasized that the utility supports the concept of pre-distribution, while noting the chance of a serious accident is exceedingly low.

"I think that any changes to the distribution requirements, they'll have to be implemented with a thorough public education campaign," said Kelly.

"OPG will support that campaign, and we're in favour, we do not object to pre-distribution of KI to residents within the primary zone."

Groups such as Greenpeace and the Canadian Environmental Law Association are supportive of the commission's work — a somewhat rare occurrence. They would like to see pills sent out beyond the 10-kilometre zone.

"This is a good step towards catching up with other countries. Canadians deserve protection on par with international best practices," said Shawn-Patrick Stensil, a nuclear analyst with Greenpeace.

"The way it's written right now it doesn't meet international best practices, but it's a good step towards that."

The groups emphasize that leaving it up to people to pick up pills on their own has obviously not worked, and in the aftermath and chaos of a nuclear accident and evacuation, people might not have the ability to get the pills in time.

"Our response is that we've had 30-plus years of making the pills available ... for people to pick up at pharmacies, and there's very low awareness by people that they should do so and that it matters to their health," said Theresa McClenaghan, executive director and counsel of the Canadian Environmental Law Association.

"Instead the messaging that people have had is that the plants are safe and there's nothing to worry about."