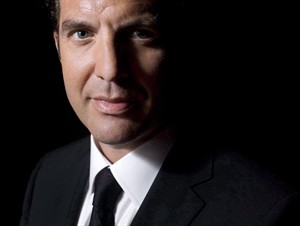 Rick Mercer poses in Toronto on Wednesday, September 16, 2009. Mercer ??? a Canadian known for his capacity to chat, rant and laugh ??? said he was dumbstruck when he learned he was to receive one of the country's top honours.THE CANADIAN PRESS/Darren Calabrese

OTTAWA - Rick Mercer — a Canadian known for his capacity to chat, rant and laugh — said he was dumbstruck when he learned he was to receive one of the country's top honours.

The comedian is among the latest admissions and promotions in the Order of Canada, a list that includes renowned filmmaker David Cronenberg and retired astronaut Chris Hadfield.

Mercer, 44, said he got the unexpected call from Gov. Gen. David Johnston.

"Honestly, I was completely speechless. ... I really didn't know what was happening. I'm not exactly sure what I said to him," said Mercer, who becomes a member of the order.

"I hope I said that I was humbled and thrilled. I was kind of in shock. It was not something I anticipated or imagined."

Mercer is the host of CBC's "Rick Mercer Report," and a champion of the anti-malaria Spread the Net campaign. He is the recipient of a Governor General's Performing Arts Award and numerous Geminis.

Cronenberg is being promoted to companion, the highest level within the order.

His most recent film, "Maps to the Stars," competed for a Palme d'Or at the Cannes Film Festival this year. His acclaimed movie "Crash" won the special jury prize there in 1996.

His 2013 memoir, "An Astronaut's Guide to Life on Earth," was a Canadian and a New York Times bestseller. Hadfield was the first Canadian commander of the International Space Station, at the end of an illustrious career with the Canadian Space Agency and the Canadian Armed Forces.

Retired general John de Chastelain, the former chief of the defence staff who played a key role in the prolonged Northern Ireland peace process, has also been promoted to companion, as was Dr. Richard Cruess, former dean of medicine at McGill University in Montreal.

Among the 19 new officers are opera singer Gerald Finley and Harold Jennings, who was cited for his work on a pediatric vaccine against the most common form of meningitis.

Shirley Marie Tilghman of Toronto and Princeton, N.J., has been made an officer in recognition of her contributions to molecular biology and for her efforts to champion women in science and engineering.

There are 64 new members of the order.

They include Pierre Boutet, a former judge advocate general of the Canadian Forces who also served as a judge on the special court for Sierra Leone, and jazz vocalist Eleanor Collins of Surrey, B.C.

The recipients will be given their insignia at a later date.

New additions to the Order of Canada are announced twice a year, around New Year's Day and Canada Day.

The honour is given to recognize an individual's "outstanding achievement, dedication to community and service to the nation."

Mercer said he couldn't help but reflect on those who helped him succeed.

"I keep thinking of all the people who allow me to do what it is that I do," he said.

"There's a lot of people who support me, a lot of teachers I've had and a lot of writers, and people who just believed in this idea of a show where I travel around the country and it's so completely unapologetically Canadian. I'm really thankful to all of those people."