DND hamstrung in converting US choppers 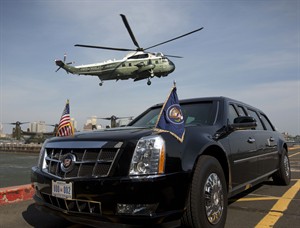 OTTAWA - Converting U.S. President Barack Obama's surplus fleet of helicopters for use in Canadian search-and-rescue would be a complicated process that would break promises National Defence made to acquire the aircraft in the first place, newly released documents show.

Former defence minister Peter MacKay ordered the air force last year to re-examine whether any of the brand-new VH-71 helicopters, purchased to supply spare parts for Canada's Cormorant choppers, could be made operational.

He was at the time dealing with the fallout from an auditor general's report, which tore a strip off the Harper government over the state of the search-and-rescue system.

Documents show that even though MacKay became justice minister last year, he continued to champion the conversion idea, raising it with his successor Rob Nicholson last fall.

The notion appears set to die a slow, quiet death even though Michael Ferguson's spring 2013 report raised concern that some of the current helicopters also being used for rescue — namely the CH-146 Griffons — were unsuitable.

A briefing note prepared for Nicholson, dated Dec. 12, 2013 and obtained by The Canadian Press under access to information legislation, shows that converting the VH-71s for operational service would violate a written National Defence pledge that they would only be used for spares.

"I wish to be quite clear that the purpose of this action is to take advantage of a unique situation to procure a package of spares and assembled spares (airframes which were left in varying states of assembly) to support the existing Cormorant Search and Rescue fleet; it is not to procure flyable assets," wrote Dan Ross, the former head of defence purchasing, on Dec. 21, 2010.

On that basis the $168-million deal was approved with the U.S. government, which wanted to off-load the choppers from its cancelled program meant to upgrade the presidential fleet.

The acquisition was considered a "non-project" and therefore exempt from the kind of paper trail and preparatory work that goes into buying full-fledged helicopters.

Going back on the deal could create the kind of procurement headache the government recently extracted itself from with the F-35. That politically-charged file saw defence and public works accused by the auditor general of not doing their homework and having a thin paper trail between the departments.

Although the air force appeared cool to MacKay's suggestion, it did conduct an assessment of the feasibility of bringing some of the nine airframes into service and has not completely ditched the idea.

Spokeswoman Ashley Lemire said in a recent email that more "detailed studies are required to determine whether to incorporate this potential capability into the RCAF (search and rescue) rotory-wing fleet."

Some of the technical obstacles they face include the fact that the airframes are uncertified and don't have valid airworthiness certificates.

The briefing to Nicholson says the use of the VH-71s for spares has been an unqualified success and is estimated will save taxpayers $24-million over the long-term when compared with having to buy the parts on the open market.