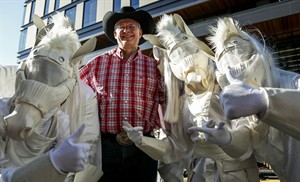 With a federal election looming next year, Harper accused Trudeau of having nothing substantial to offer to voters, contrasting the Conservative government's accomplishments with the Liberals' positions on the economy and crime.

Mention of Trudeau elicited boos from the crowd, which included federal cabinet ministers and provincial politicians.

Harper's speech made scant mention of the Opposition New Democrats and didn't single out NDP leader Tom Mulcair by name.

Harper said the economy is "rock solid" in a fragile global environment and his government has created jobs, lowered taxes and increased trade agreements with other countries, including the European Union.

"The opposition will say now's the time to spend and spend and spend, but next year we will use the fiscal room to do what we promised: cut taxes for hard working Canadian families. That's our priority," Harper said.

Harper said through the years all of the agreements were opposed by the NDP and although the Liberals announced in the 1970s they wanted free trade with Europe "They never even got to the bargaining table."

The prime minister said both the Liberals and NDP offer the alternative of spending without any fiscal responsibility.

"Never, ever cut any spending; Spend more, now and always; let the deficit rise, increase taxes. You can look around the world at any number of basket cases to see how that works out."

The prime minister said he is particularly proud of the progress made in implementing the Conservative agenda to ensure streets and communities are safe.

"And if, God forbid, Canadians are attacked, or robbed, if they lose someone they love to a murderer, or if they see their children driven to suicide by bullying and harassment… the first thing they want their government to do is not make excuses for criminals, but to stick up for victims," Harper said.

Harper said Canadians need to be aware that Trudeau wants to undo all the good work that his government has achieved.

"In fact, Justin Trudeau has said he will repeal our reforms. Repeal, for example our mandatory prison sentences for serious, violent crime," he said.

"In other words, I like to describe it this way: he will restore that key liberal principle of criminal justice...that the offender must be considered innocent even after being proved guilty."

Harper said Canadians have to make a choice when they go to the polls next year - what his government has delivered or what Justin Trudeau is offering.

He said the Liberals will offer to give voters anything they want.

"Want something from the government? Whatever you want, they'll spend money on it and you can have it. Don't worry about who's going to pay for it. Don't like crime? Just legalize marijuana and, somehow, it will all go away."

"He has nothing - absolutely nothing - of substance to offer."

Trudeau and two of his children took in the Calgary Stampede parade on Friday before heading to the rodeo. He told reporters he's optimistic the Liberals can win over Albertans, despite their failure to snag two Alberta seats that were up for grabs in recent byelections.

Earlier Saturday, Harper served pancakes at the Stampede breakfast at the Chinook Centre mall — the largest breakfast during the 10-day cowboy festival that attracts about 50,000 people.