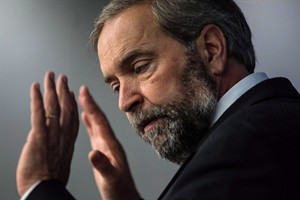 Federal NDP Leader Thomas Mulcair speaks to the Toronto Region Board of Trade on June 20, 2014. Prime Minister Stephen Harper has taken a chopper tour of flood-stricken southern Manitoba but apparently his government doesn't see any need for NDP Leader Tom Mulcair to see the disaster zone for himself. THE CANADIAN PRESS/Chris Young

WINNIPEG - Tom Mulcair is accusing the Harper government of playing petty partisan games with natural disasters after he was denied permission to tour Manitoba's flood zone.

The NDP leader was in Winnipeg on Wednesday, just hours before floodwaters were expected to crest in the southwestern part of the province.

With the help of Premier Greg Selinger's office, Mulcair had arranged to get a briefing and a tour of a military command post that's co-ordinating the work of 500 soldiers who've been helping fill sandbags and shore up dikes along the swollen Assiniboine River.

Brig. Gen. Christian Juneau, commander of the third Canadian Division, had agreed to the tour, subject to approval by Defence Minister Rob Nicholson.

But late Tuesday, Mulcair said he was informed by Nicholson's office that his tour had been vetoed.

"Frankly, we find that regrettable," Mulcair said during a news conference in Winnipeg.

"There are times when everyone just has to come together and put partisan politics aside and, unfortunately, Mr. Harper doesn't seem to understand that."

A spokeswoman for Nicholson said the government has nixed all tours for the time being.

"The next 48 hours are key to dealing with the Manitoba flood as it is expected to push through Portage La Prairie," Johanna Quinney said in an email.

"As a result, no tours will be approved at this time so our men and women on the ground can focus all their efforts (on) keeping Manitobans and their properties safe during this crucial time."

Mulcair didn't buy the government's explanation, noting that opposition leaders have always been given clearance in the past to visit flood zones. And he noted that Prime Minister Stephen Harper took a 20-minute helicopter tour of Manitoba's flood zone on Sunday, accompanied by local MPs.

"I do notice that rule didn't seem to exist last weekend when Mr. Harper was able to go through. I don't think there is any excuse for it," Mulcair said.

"This is a time when you are supposed to put partisan politics aside, have everybody working in one direction to show support for the people in those communities. That's all we were trying to do."

While Mulcair criticized the Harper government for its weak stand on climate change, which he blamed for the increasing frequency of such natural disasters, he bristled at the suggestion he too was playing partisan games by visiting the region.

"You can't get into some of these areas unless you are being accompanied by the military," he said.

"It's a flood zone. It's a disaster area. You can't just go in there with a four-by-four on your own. You've got to play by the rules and that's what we were trying to do."

Selinger's NDP government has welcomed politicians of all partisan stripes who want to see the extent of the crisis for themselves. But the premier refused Wednesday to get dragged into a partisan scuffle over Mulcair's cancelled tour.

"The federal government makes its own decisions about who they can allow to be here," Selinger said during a media briefing.

"We think everybody needs to understand the gravity of the situation but ... we're focusing on making sure we're in a position to make the best decisions as rapidly as possible to protect people and property."

Selinger declared a state of emergency last Friday and asked for military assistance to help communities at risk of being submerged to prepare for the floodwater crest.

This summer's flood, triggered by torrential rain and water pouring in from Saskatchewan, could break records set during one of Manitoba's worst floods in 2011.