Hamas has no interest in peace: Baird 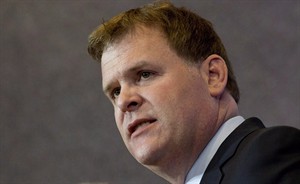 Foreign Affairs Minister John Baird responds to a question at a news conference Friday, May 2, 2014 in Ottawa. THE CANADIAN PRESS/Adrian Wyld

OTTAWA - Canada's foreign affairs minister says the refusal by Hamas to honour an Egyptian-sponsored ceasefire in Gaza makes it clear the group has no interest in peace.

Israel resumed bombardment of Gaza on Tuesday after Hamas rejected the truce plan and instead unleashed more rocket barrages at the Jewish state.

"It is a conflict between an international terrorist organization and the Jewish state," he said Tuesday. "Hamas started this bloodshed. Hamas can end it."

Hostilities between the two sides escalated this month after three Israeli teenagers were killed, and a Palestinian teen died in a revenge attack.

In a statement issued Tuesday, Hamas said it was not compelled to abide by the ceasefire since it was excluded from consultations on the proposal.

Baird said he regrets the loss of life in the region and feels the sympathy everyone should feel toward the innocent victims of the conflict, but said Israel has been left with no choice but to defend itself.

"I just can't imagine the horror if you're a Palestinian mother or father and your next-door neighbour is a Hamas terrorist leader, launching rockets from just a few metres from your house," said Baird.

"How could you not have great compassion for those who have been tragically killed in war?"

But blame for the deaths, he said, lies squarely at the feet of Hamas.

Nearly 200 Palestinians have been killed in strikes in Gaza since Israel launched the campaign over a week ago to stop the rocket fire.

Gaza militants have reportedly fired more than 1,100 rockets toward Israel in the fighting, although Israel's so-called "Iron Dome" defence system has prevented many of the projectiles from reaching their intended targets.

At least 15 Israelis, including several children, have also been injured by rocket fire from Gaza, said police.

Tuesday marked the first time an Israeli had been killed in the attacks.

Police said a man in his 30s who was delivering food to soldiers died when a mortar was launched at the Erez Crossing with Gaza.

The United Nations Relief and Works Agency for Palestine Refugees, or UNRWA, has called the Israeli attacks against civilians and civilian infrastructure in Gaza contrary to international humanitarian law.

UNRWA said there are about 17,000 refugees taking shelter in 20 schools in Gaza, and the airstrikes have damaged dozens of buildings, including medical clinics and schools.

The bloodshed in the Middle East has also sparked a war of words in Ottawa between the Harper Conservatives and the opposition parties, with accusations lobbed from all parties that their rivals were using the conflict to score political points.

Liberal Party Leader Justin Trudeau issued a news release commending Israel for having tried to enter into a ceasefire and condemning Hamas for rejecting it.

"Hamas is a terrorist organization and must cease its rocket attacks immediately,” said Trudeau.

But Baird criticized Trudeau for taking too long to issue such an equivocal statement, complaining in French that the sentiment was only expressed after seven days while he Conservatives had indicated strong support for Israel since the most recent conflict erupted a week ago.

"We are urging Justin Trudeau to condemn his remarks and demand an apology," Conservative Party Communications Director Cory Hann said in a note to supporters linked to a fundraising campaign.

Similarly, the Tories earlier issued a statement on Twitter that accused the Liberals of not standing with Israel — a tweet that was linked to a Conservative party website that asked for personal information and includes a "Donate Now" button at the top of the page.

The opposition New Democrats also got into the mix over the weekend, criticizing a statement by Prime Minister Stephen Harper that expressed Canada's unwavering support of Israel while making no mention of the loss of Palestinian lives.

His remarks were followed by condemnation from Costas Menegakis, the parliamentary secretary to the immigration minister, who accused Angus of "attacking the people of Israel" by using inflammatory language.