The Turbot War: A look back at how Canada stood up to foreign overfishing (book excerpt) 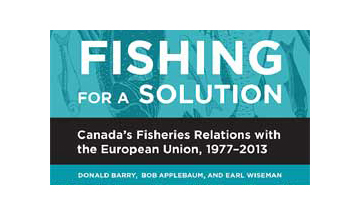 A ten-year controversy between Canada and the European Union (EU) involving overfishing and fishing violations by EU vessels from Spain and Portugal in international waters outside Canada’s 200-mile limit came to a head in 1995. Fishing in those waters is managed by the Northwest Atlantic Fisheries Organization (NAFO). With scientists warning that turbot, the largest remaining commercial fish stock in the Northwest Atlantic, was overfished, NAFO established a total allowable catch and quotas for the 1995 fishing season. Responding to pressures from Spain and Portugal, the Union objected to its quota and adopted a much higher one, precipitating the “Turbot War” with Canada. Prime Minister Jean Chrétien’s government forced a showdown with the EU, taking enforcement action against Spanish vessels, which set the stage for a new quota-sharing agreement and tougher conservation and enforcement rules to deter fishing violations. In this excerpt from their just-published book, Fishing for a Solution – Canada’s Fisheries Relations with the European Union, 1977-2013, authors Donald Barry, Bob Applebaum and Earl Wiseman describe the arrest of the Spanish trawler Estai, and the cutting of the steel cable attaching the fishing net of another Spanish trawler, the Pescamaro Uno, which opened the way for a negotiated settlement.

On Friday, March 3, after the EU lodged its objection with NAFO, [Fisheries Minister Brian] Tobin announced that the Coastal Fisheries Protection Act regulations had been expanded to make it an offence for Spanish and Portuguese vessels to fish for turbot on the Nose and Tail of the Grand Banks. [Prime Minister Jean] Chrétien sent a letter to Jacques Santer, the President of the European Commission, to explain the action and to propose a 60-day fishing moratorium for Canadian and European vessels to allow negotiations to take place.

On Monday, March 6, the EU’s reply came in the form of a strongly worded message from the Foreign Affairs Council, which defended the EU’s right to use the objection procedure, restated its commitment to con¬servation, and condemned the Coastal Fisheries Protection Act as a viola¬tion of international law. Spain announced that it would send a naval ves¬sel to protect its vessels. Tobin warned that fisheries enforcement officers would begin seizing Spanish trawlers within 24 hours if they did not stop fishing. The Newfoundland government and the fishing industry were solidly behind the minister.

An immediate confrontation was averted when the Spanish vessels withdrew eastwards, but an EU spokesman affirmed that they were free to continue fishing. On Wednesday, March 8, the trawlers returned and resumed operations. Tobin met with Chrétien and other senior officials to make the case for arresting a Spanish vessel, using force if necessary. André Ouellet [the Minister of Foreign Affairs] and David Collenette, the Minister of National Defence, were “extremely reluctant” to back Tobin’s plan. Gordon Smith, Ouellet’s deputy minister and former ambassador to the EU; James Bartleman, Chretien’s foreign policy advisor; Eddie Goldenberg, his senior policy ad¬visor; and Jocelyne Bourgon, the Clerk of the Privy Council, who “had already had several heated exchanges with Tobin,” all urged the prime minister not to provoke the EU. Chrétien recalls that he “listened to both sides, made up my own mind, and decided to back Tobin” subject to a final diplomatic effort, adding that he kept the minister “in check when I felt he was trying to go too far.”

At a press conference shortly thereafter, Tobin confirmed that the government would not back down. Ottawa preferred a negotiated settle¬ment, but one way or another the overfishing had to end. According to the Toronto Sun, Tobin had “privately confided that he hoped the diplomacy would break down because only action could lead to meaningful talks.” At 4:30 a.m. (EST) on Thursday, March 9, Chrétien telephoned Santer in an attempt to avert a confrontation. But Santer would not agree to a mora¬torium, and Chrétien would not agree to negotiations until the vessels had left the Grand Banks. Shortly thereafter, Canadian fisheries patrol vessels were instructed to target a trawler for arrest.

Canadian officials had been keeping a close eye on the Estai, one of several Spanish trawlers fishing on the Nose of the Grand Banks, which had been cited for fishing violations the previous year. Late in the after¬noon of March 9, fisheries and RCMP officers seized the Estai after a high seas chase that began when the vessel repelled earlier boarding attempts and cut its net in an effort to escape. The chase ended four hours later when a Canadian fisheries patrol boat, on orders from Ottawa, fired warn¬ing shots across its bow. In announcing the arrest, Tobin declared that the government was imposing a moratorium on turbot fishing inside and outside the 200-mile limit. However, Chrétien agreed with a suggestion from the French ambassador, whose country held the presidency of the EU at the time, “to send a negotiating team immediately to Brussels, even if uninvited, to make the Canadian case on the ground and mitigate the pressure for European Union retaliatory action on Monday morning.” On Friday afternoon, March 10, a high-level delegation, consisting of Smith, Bartleman, and William Rowat, the Deputy Minister of Fisheries and Oceans, quietly departed for Brussels ready to begin discussions with European Commission officials.

Although a Canadian examination of the Estai found evidence of serious fishing violations, including use of an illegal fishing net, Canada decided to release the vessel allowing negotiations to get underway. But defiant Spanish trawlers resumed fishing, accompanied by a naval patrol vessel with orders to use “deadly force” to protect them. Brian Tobin revealed that Canadian fisheries patrol ships had been fitted with warp cutters designed to sever the steel cables that attach trawlers’ fishing nets.

On Sunday, March 26 … a specially equipped fisheries patrol vessel cut the net cable of the Pescamaro Uno, one of the Spanish trawlers fishing on the Grand Banks, after it refused to allow Canadian inspectors on board. Tobin, who was in New York attending the UN Conference on Straddling and Highly Migratory Fish Stocks, said that the action had forced the remaining ships to withdraw from the area. The next day, [EU fisheries commissioner Emma] Bonino, who was also attending the conference, accused Canada of turning the North¬west Atlantic into the “Far West.” She claimed Canada had fabricated the evidence against the Estai, and that an examination by EU inspectors on the vessel’s return to Spain had revealed no irregularities. This was no sur¬prise, as the vessel had plenty of time on its return to home port to ensure that incriminating evidence was removed. The EU also refused to examine the illegal net, which was in Canada’s custody. Tobin denounced the “eco¬logical madness” of uncontrolled fishing and accused the Union of failing to monitor or enforce measures to conserve the depleted turbot stock.

Despite the inflammatory exchanges, Canadian and EU authorities were moving towards a diplomatic solution. That evening, Santer tele¬phoned Chrétien to express concern over the warp-cutting incident. Chrétien defended that action but agreed that a negotiated settlement was needed. Both sides would order their officials to make progress in their talks and to avoid further confrontations. The seriousness of this com¬mitment was underscored when William Rowat returned to Brussels on Tuesday, March 28. He had a mandate to conclude the negotiations link-ing turbot quotas to control and enforcement issues that had been the sub¬ject of ongoing discussions. Rowat was soon joined by Gordon Smith. Newfoundland government and fishing industry officials also arrived in Brussels to advise the Canadian negotiators.

Meanwhile, the Canadian government kept up its pressure on the EU. The day after Bonino demanded proof of EU violations, Tobin displayed the Estai’s huge net, the size of a football field, along with its illegal small mesh liner, on a barge in the Hudson River across from the UN headquar¬ters in New York. He also produced undersized turbot, smaller than his hand, as well as American plaice found in a secret hold on the vessel. In a shameless but highly effective bit of hyperbole, Tobin declared, “We are down to the last, lonely, unloved, unattractive little turbot, clinging by its fingernails to the Grand Banks of Newfoundland, saying ‘Someone, reach out and save me in this eleventh hour as I’m about to go down to extinction’.”

The demonstration dealt a damaging blow to the EU’s credibility. Backing away from her accusations, Bonino called for an end to the “war of words” and a resolution of the dispute.

Donald Barry is a professor emeritus of political science at the University of Calgary. Bob Applebaum and Earl Wiseman are former directors general of the international affairs directorate at Canada’s Department of Fisheries and Oceans.