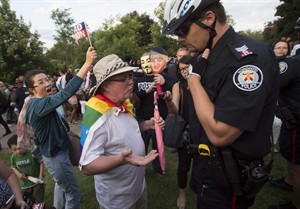 Rob Ford supporters jeer as a LGBT-rights supporter speaks to a police officer after claiming he was assaulted at Ford Fest in Toronto on Friday, July 25, 2014. THE CANADIAN PRESS/Darren Calabrese

TORONTO - A Toronto man has been charged after police say an online post urged people to throw food at Mayor Rob Ford during a party in a city park.

Police say they became aware Thursday of an Internet post on a Toronto-based website that referred to the annual "Ford Fest" event to be held the following day at an east-end park.

It's alleged the author of the post offered free beer to anyone who threw eggs or tomatoes at Ford.

Police say Dilaz Rajwani, 37, turned himself in on Friday afternoon, and is charged with counselling an uncommitted indictable offence.

He is scheduled to appear in court on Sept. 3.

Hundreds of supporters and a handful of protesters showed up for Friday evening's party, where the mayor shook hands, posed for pictures and signed autographs.

Ford's role as mayor has been largely symbolic since November, when city council stripped him of most of his power following his admissions of alcohol abuse and drug use during "drunken stupors.''