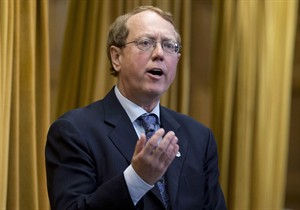 NDP MP Murray Rankin rises to question the government during question period in the House of Commons in Ottawa on December 11, 2012. The New Democrats are pressing for an unusual summer meeting of a parliamentary committee to clear the air over the auditing of charities for their political activities. Rankin, the party critic for national revenue, wants the finance committee to convene before Parliament resumes in six weeks, calling the matter urgent. THE CANADIAN PRESS/Adrian Wyld

OTTAWA - The New Democrats are pressing for an unusual summer meeting of a parliamentary committee to clear the air over the auditing of charities for their political activities.

Rankin wrote a letter Tuesday to James Rajotte, Conservative chair of the committee, to say there are too many allegations that the audits are being used to silence opponents of the Harper government.

Since the spring of 2012, the Canada Revenue Agency has launched 52 audits of charities for their political activities, after the government ordered the special probes and eventually provided some $13.4 million for the initiative.

The first wave of audits in 2012-2013 targeted environmental groups who have opposed the government's energy and pipeline policies, but the initiative has since expanded to cover other groups who fight poverty, provide international aid and promote human rights. Many have also publicly criticized government policies.

Critics say the audits have caused an "advocacy chill," preventing the scrutinized organizations from speaking out for fear of aggravating the auditors and potentially losing their coveted charitable status.

The Canada Revenue Agency refuses to provide the names of the groups being audited, citing confidentiality provisions of the Income Tax Act.

Rankin said public hearings before the finance committee would give besieged charitable groups a safe venue to speak out without appearing to provoke the tax agency.

"It wouldn't be as if they've gone to the press and spilled the beans," he said in an interview from his Victoria riding.

"We can't let this fester much longer. We've got to clear the air. It's bad for the reputation of the CRA and it's bad for the environmental organizations and other charities that are somehow under a shadow."

Rajotte, however, said the issue has already been examined in depth at committee, most recently in the spring session of Parliament.

"A number of us asked CRA officials to clarify how CRA goes about determining who should be audited," he said in an interview from Edmonton.

"At the committee, they've always been very explicit that there's no political direction whatsoever."

The 10 committee members must decide whether to hold a special session, not the chair, Rajotte added, noting that the three NDP members would be enough to call such a meeting.

Last month, the New Democrats wrote to Revenue Minister Kerry-Lynne Findlay, asking her to order a special investigation into allegations of politically motivated audits of charities, headed by a retired judge or other neutral person.

Findlay roundly rejected that request Tuesday in a separate letter to Rankin and Megan Leslie, the party's environment critic.

"Your baseless accusation that I have used my office to blatantly misappropriate CRA resources to target and intimidate charities that may not agree with our government's policies is absolutely reprehensible," she wrote.

"As an honourable parliamentarian, I find your unwarranted attacks on the integrity of the CRA and my office shameful and plunges parliamentary discourse to new lows."

She then called on the NDP to repay taxpayers for using publicly funded workers at satellite offices, a separate unresolved issue that was raised in the last session of Parliament.

Canada's charities are permitted to devote up to 10 per cent of their resources to political activities, though the definition of what that constitutes is considered vague by some lawyers specializing in the area. Partisan activities, such as promoting a particular candidate for office, are clearly forbidden.

The CRA has devoted at least 15 auditors to the political-activities audit initiative, and expects to carry out 60 such audits by 2016.