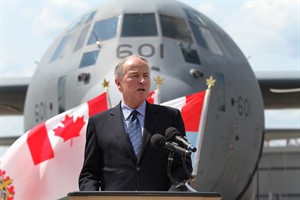 Nicholson made the announcement at a military base in Trenton, Ont., where a CC-130J Hercules plane loaded with "non-kinetic military equipment" was set to take off for the first in a series of military transport flights.

"(Russian President Vladimir) Putin's failure to end his support to armed rebel groups constitutes a real threat to international peace and security," Nicholson said. "Canada will not stand by in the face of this threat."

Helmets, ballistic eyewear, protective vests, first aid kits, tents and sleeping bags are among the supplies being flown to Ukrainian troops. The "logistic equipment" will allow Ukrainian forces to better detect and track the movement of illicit goods and people, Nicholson said.

"Ukraine has asked for this and once again we are delivering," he said. "The Putin regime has not provided any indication they are prepared to respect Ukraine's territorial integrity or use their control over Russian-backed agents to end the violence in Ukraine."

Ukrainian ambassador Vadym Prystaiko said his country was "very grateful" to Canada for its support.

"We will be using this equipment to end war as fast as possible," he said. "We will be able to save more lives, both troops and civilians, and even the separatists themselves."

Canada's contribution was announced just hours after NATO's secretary general told leading officials in Ukraine that the military alliance stood ready to support the country with advisers and assistance.

Anders Fogh Rasmussen stopped short of committing to direct assistance in Ukraine's ongoing conflict, but said NATO would intensify its co-operation with Ukraine on defence planning and reform.

The Canadian announcement also follows fresh sanctions and travel bans from Ottawa against several top Russian and Ukrainian politicians and groups with ties to Putin's government. Moscow responded with a ban on Canadian food imports for a year.

Canada has about 1.2 million people of Ukrainian descent, and Ottawa's ongoing assistance for Ukraine during the crisis has been seen by many observers as an attempt to bolster domestic electoral support within Canada.

Ihor Kozak of the League of Ukrainian Canadians praised the federal government Thursday for taking what he called a leadership role among Western leaders regarding the conflict.

Ukraine and Western countries, including Canada, have accused Moscow of backing the separatists with weapons and soldiers, a claim the Russian government has repeatedly denied.

The West has also accused Russia of most likely providing the insurgents with surface-to-air missiles that may have been used to shoot down a Malaysia Airlines passenger jet over rebel-held territory on July 17, killing all 298 people on board.

Prime Minister Stephen Harper has frequently said Russia's occupation of the Crimean Peninsula and provocative military activity in eastern Ukraine is a "grave concern" to Canada and the world.