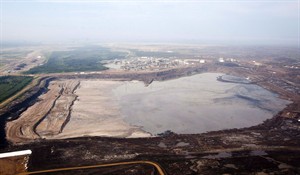 A tailings pond at the Syncrude oilsands facility is seen from a helicopter near Fort McMurray, Alta., July 10, 2012. A new report says some of the world's costliest energy projects are in Alberta's oilsands and many could be cancelled without higher oil prices. THE CANADIAN PRESS/Jeff McIntosh

CALGARY - Some of the world's costliest energy projects are in Alberta's oilsands and some could be cancelled without higher oil prices, according to a new report by a London-based financial think-tank that focuses on climate risk.

The study by the Carbon Tracker Initiative highlighted 20 of the biggest projects around the world that need a minimum oil price of US$95 a barrel to be economically viable.

Most on the list require prices well north of US$110 a barrel and a few in the oilsands even need prices higher than US$150, said the report.

Crude for September delivery was at around US$97 a barrel in New York on Friday.

In total, the 20 projects represent close to $91 billion in capital spending over the next decade.

The report's authors question whether those funds should be invested in risky projects.

"This analysis demonstrates the worsening cost environment in the oil industry and the extent to which producers are chasing volume over value at the expense of returns," said CTI analyst Andrew Grant.

"Investors will ask whether it is prudent for oil companies to bet on ever higher oil prices when they could be returning cash to shareholders."

High on the list were Houston-based ConocoPhillips' oilsands operations, which include joint ventures with Cenovus Energy Inc. (TSX:CVE) at Foster Creek and Christina Lake and with Total E&P Canada at Surmont.

A spokeswoman for Cenovus, which operates Foster Creek and Christina Lake, questioned how CTI came up with its figures, as its steam-driven projects are quite competitive with supply costs between just US$35 and US$65 a barrel.

Michal Moore, an energy economist with the University of Calgary's School of Public Policy, said "US$75 is a pretty good price" for established oilsands projects.

For newer oilsands developments, Moore said a long-term break-even price of US$105 is reasonable, but scoffed at the figures above US$150 in the CTI report.

"We've got to have big numbers to have those things pay off, especially since they come saddled with newer environmental restrictions and they probably made a bunch of side-deals with landowners like First Nations groups," said Moore.

"They're carrying a lot of obligations with them. Those numbers are $100-$105 for the better ones."

Other pricey projects highlighted in the report were in deepwater or ultra deepwater off West Africa and Brazil, as well as in the Arctic.

In May, Total and partner Suncor Energy Inc. (TSX:SU) decided to indefinitely defer their $11-billion Joslyn North mine in Alberta because the economics just weren't good enough.

And in June, the Canadian Association of Petroleum Producers predicted oilsands production would grow at a slower pace than previously expected because of rising costs and capital constraints.

But the figure is 7.7 per cent lower than the 5.2 million barrels of daily oilsands output CAPP predicted for the same time frame last year.

The CTI, funded by a range of European and American foundations, describes itself as a not-for-profit organization "set-up to produce new thinking on climate risk."