What did you just call me? Harper tags Trudeau as an elite in run-up to election 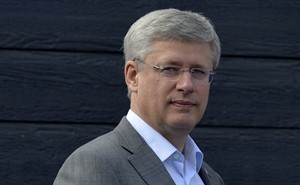 Canadian Prime Minister Stephen Harper listens to a speaker during an event at the Yukon college in Whitehorse, Thursday August 21, 2014. THE CANADIAN PRESS/Adrian Wyld

OTTAWA - In the communications arsenal the Conservatives are building against Liberal Leader Justin Trudeau, the word "elite" is proving to be one of the most popular put-downs.

Prime Minister Stephen Harper has used the word "elite" repeatedly when referring to Trudeau and those around him, part of the narrative the party is building in advance of the 2015 election.

"You can listen to the liberal elites, and the liberal media pundits and liberal interest groups and you can hear the plan: tell Canadians there’s something new and exciting," Harper said Wednesday in Langley, B.C., referring to Trudeau.

Trudeau's top adviser, Gerry Butts, fired back on Twitter: "My dad mined coal for 40 years in Cape Breton. He'd be proud the prime minister thinks his son's an 'elite.'"

Harper's speech to the Conservative party convention last fall provided some hints as to who exactly the Tories consider to be an elite: lobbyists, academics, public servants and the courts all earned the prime minister's scorn.

The party successively painted Trudeau predecessor Michael Ignatieff as an elite, arrogant academic, with one attack ad declaring, "He's just in it for himself."

Conservative commentator Stephen Taylor said he would fully expect to see the party circulate photos of the Liberal leader in the vintage Mercedes his father and former PM Pierre left to him.

Still, that's not exactly what the Tories are driving at when they talk about elites, said Taylor, vice-president of digital public affairs at FleishmanHillard.

"Elite is not to say one has more money or better education," he said. "Elite, the way it's used politically in Canada, is to suggest that a person who is running for office might know what's better for your life than you do."

What it boils down to, Taylor added, is the fight for that large pool of middle-class voters who are concerned about their finances at home.

He portrayed Labor PM Paul Keating's government as out of touch behind the "tinted glass of their Sydney" cars.

But Harper has been in government for eight years — not exactly an outsider. He has often surrounded himself with Canada's upper crust, including millionaires Nigel Wright and Irving Gerstein in senior positions. Harper has also appointed wealthy Canadians to the Senate, such as Nicole Eaton, Linda Frum and David Braley.

David Coletto, CEO of polling and research firm Abacus Data, said the longer Harper is in power, the harder it becomes to use such messages against an opponent.

Yet framing the Trudeau as elite might still find resonance with Harper's core constituency, Coletto explains, particularly in the West where many have not forgiven or forgotten the national energy program of his father.

With the polls showing a narrowing pool of potential Conservative voters, the party is choosing messages with a harder edge.

"Trudeau is the quintessential image of that group of people in their minds."