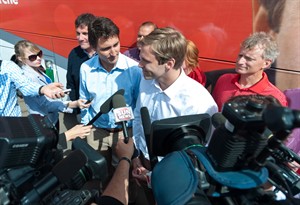 Trudeau waded into the controversial issue while at a rally in Moncton with New Brunswick Liberal Leader Brian Gallant, who is vying to become premier after the Sept. 22 provincial election.

"I'm very much in agreement with Mr. Gallant that in terms of fracking and shale gas, we need to make sure that we have all the information, that there is proper science done," Trudeau said.

"That's why we need to make sure that we're strong on both the science and the long-term vision for New Brunswick and for Canada before we move ahead with that."

The question over whether to develop New Brunswick's reservoir of shale gas has dominated the early days of the election campaign.

Progressive Conservative Premier David Alward launched his re-election bid Thursday in front of a field of natural gas wells, promoting the merits of an industry he says can reverse its economic struggles.

The issue has been controversial. Nearly a year ago, protests over shale gas development spiralled into violence when the RCMP enforced an injunction to end a blockade outside an energy company's storage compound in Rexton, N.B. Police cars were torched and dozens were arrested.

Trudeau was also asked what if any advice he would give to Gallant. Like Trudeau, Gallant, 32, has faced criticism from some who say he is too inexperienced to lead.

Trudeau dismissed that concern, saying Gallant has surrounded himself with a strong team and will make for a co-operative partner in Ottawa should he become premier.

The two leaders rode Gallant's campaign bus to a Tim Hortons in Moncton and went from table to table shaking hands and posing for pictures.

Some opponents of abortion attended the campaign stop, which Trudeau said was a sign of one of Canada's strengths — the ability to express oneself freely. Still, he said his view that abortion should be accessible to all women has not changed.

Access to abortion has dogged both the provincial Tories and Liberals since the Morgentaler Clinic in Fredericton, the only private clinic that offered the procedure in the province, closed this summer.

"A baby has a right to live," said Rhonda Farrer as she waved a placard near the Liberal campaign bus. "They can't make that decision and they need somebody to make it for them."

Farrer said she was able to adopt two children because their mothers decided against abortion.

Later at a rally in Fredericton, Trudeau and Gallant were greeted by abortion rights advocates who want section 84-20 of the province's Medical Services Payment Act to be scrapped.

By law, a woman in New Brunswick who wants an abortion covered by medicare must have two doctors certify in writing that it is medically necessary and it must be done by a specialist in one of two approved hospitals.

Alward has said there is no need to change the law.

Gallant said Saturday it is a barrier and he would launch a review aimed at getting rid of all barriers to abortion.

Jaden Fitzherbert, an activist with Reproductive Justice New Brunswick, stood outside the Fredericton rally and said the politicians need to clearly say what they would do to ensure access to abortion.

"We think that pro-choice actions speak louder than pro-choice words," she said.

At dissolution, the Tories had 41 seats, the Liberals 13 and there was one Independent.

This election is being fought on a new electoral map that cuts the number of seats to 49 from 55.