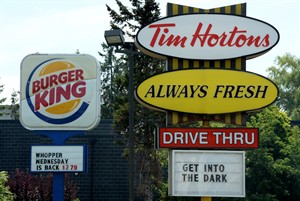 TORONTO - The players in Burger King's deal to buy Tim Hortons are promising there will be no mixing of Whoppers and Timbits but industry analysts say there's no guarantee the Canadian doughnut and coffee chain will come out of the multi-billion-dollar merger untouched.

The two companies announced on Tuesday that Miami-based Burger King and private equity firm 3G Capital would buy Tim Hortons in a $12.5-billion deal aimed at increasing the number of fast food companies internationally and in the U.S., a market Tim Hortons describes as a "must-win."

When asked if the deal meant mingling the brands, such as Burger King selling Tim Hortons' coffee, the answer was a quick and definitive "Absolutely not."

"There's no plan to mix the product or do any co-branding," said Daniel Schwartz, CEO of Burger King. "The real driver here is the growth, and the ability to take such a strong and beloved brand internationally."

Tim Hortons chief executive Marc Caira will take a non-executive role, as he will be appointed vice-chairman and become a director.

"It's going to be American-run," summed up Brynn Winegard, a marketing expert at Winegard and Company.

"In the short term, they are going to be very careful about not alienating any of their brand-loyal consumer but, in the longer term, will we start to see some more similarities? I think so."

Both companies emphasized Tuesday that the focus of the deal was growth, given that it will create the world's third-largest quick service restaurant company, with about $23 billion in system sales and more than 18,000 restaurants in 100 countries.

"We clearly said that the international markets for us were untapped potential, and certainly this new relationship will allow us to move much quicker as a combined organization than we felt we could move ourselves," said Caira.

"This transaction will not only allow us to preserve our rich Canadian heritage, but it will allow us to bring even more meaningful benefits to Canada in the long run."

Tim Hortons has paired off with a large U.S. chain before, when it was purchased by Wendy's International Inc. in 1995. It was spun-off from Wendy's in 2006.

Jim Danahy, chief executive of consultancy CustomerLab, said while the deal will give Tim Hortons access to the infrastructure and expertise it was seeking, the new management structure that puts 3G and Burger King in charge raises questions about Tim Hortons's future.

"It clearly sends the signal that they intend to apply their management principles of cost-cutting and meritocracy as they describe it - the youthful assumption that it can always be done better - which will now be applied to the much more profitable and successful acquired company, in a country they've never worked in before," Danahy said about the prospective new owners.

"There may be some justification for concern over what might - and we simply haven't heard - be turned into: `If it isn't broke, break it.'"

Winegard said customers aren't likely to notice many of the immediate changes at the stores since those may involve merging logistics and supply chain infrastructure, or developing joint corporate strategies.

They could also include similar advertising messaging, service interfaces or style and decor.

"You can't take two entities that currently have duplication of efforts and double the amount of supply chain personnel and so on...that they're not going to somehow try to economize, through economies of scale and by amalgamating and merging some of their current operations," she said.

The deal comes just over a day after both sides confirmed they were in talks, a possibility which sent their stock surging and created a flurry of speculation about what the combination may mean for Tim Hortons.

Burger King Worldwide Inc. had a stock market value of roughly US$11.1 billion on Tuesday, slightly less than the value of its offer for Tim Hortons.

The corporate headquarters of the new global company will be in Canada but, despite much speculation about the possible tax benefits of such a deal, Behring said taxes weren't a motivating force for the move. Burger King says it won't see any meaningful change to its tax rate by setting up the new company in Canada.

"This is strategic transaction, this is creating a new global leader in the QSR sector, and it's not being driven by tax rates," he said. "Burger King's effective tax rate is the in mid to high 20s, which is largely consistent with Canadian taxes."

The companies were adamant there would not be changes to how franchises are managed or a loss of jobs, saying repeatedly the deal wasn't about synergies but rather growth.

Tim Hortons' shares were up 8.3 per cent to $88.86 on the Toronto stock market, while Burger King (NYSE:BKW) ticked down 2.9 per cent to US$31.45. Both shares surged almost 20 per cent on Monday when reports of the deal first surfaced.