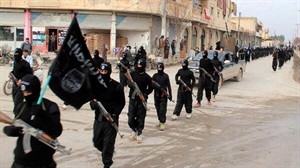 This file image posted on a militant website on Tuesday, Jan. 14, 2014, shows fighters from the al-Qaida linked Islamic State of Iraq and the Levant (ISIL) marching in Raqqa, Syria. THE CANADIAN PRESS/AP, Militant Website

In a notice of motion tabled with the Commons public safety and national security committee, Wayne Easter seeks hearings on any threat to Canada posed by fighters involved with terrorist groups including the Islamic State of Iraq and the Levant, commonly known as ISIL.

With Parliament set to reconvene this month, the motion calls for testimony from Public Safety Minister Steven Blaney, intelligence officials, the RCMP and other parties concerned about the radicalization of Canadian youth.

A federal report released last week said the government knew of more than 130 individuals with Canadian connections who were abroad and suspected of supporting terror-related activities.

It said the government was aware of about 80 such people who had returned to Canada.

The RCMP is developing an "intervention program" that would engage police and local communities to deal with people at risk of turning to extremism, the report added.

One Ontario man who died in combat in Syria last year had taken part in an elaborate video, widely circulated on the Internet following his death with the aim of inspiring like-minded young people to wage jihad.

CSIS and the RCMP have been reaching out to community leaders for years in an effort to discourage impressionable youths from heeding the call of radical Islamic figures.

As extremists wage guerrilla-style battles in cities across war-stricken Syria and parts of Iraq, western nations have begun to confront the prospect of combatants returning home — possibly harbouring violent intentions.

In a letter to Blaney made public Friday, Easter said hearings on this "critically important issue" should happen on "an urgent basis" to examine key elements of the RCMP's intervention plan, why the program is being developed only now, and previous efforts — successful or not — to deal with the risk of radicalization.

Easter noted that British Prime Minister David Cameron has called ISIL a direct threat to the United Kingdom, announcing plans for legislation that would give police the power to confiscate passports of suspected terrorists at the border.

Cameron also said plans to block suspected British terrorists from returning to the U.K. would be developed on a cross-party basis, and that suspects could be relocated or required to take part in deradicalization programs.

The Liberal MP, once the minister responsible for national security, said in the letter to Blaney he was not suggesting that similar measures were needed in Canada.

"Nevertheless, I believe that Canadians have the right to be informed about the Canadian government's views about these initiatives."

Blaney spokesman Jason Tamming said Friday that committees are masters of their own business, adding the minister always welcomes an invitation to testify.

"We are closely monitoring the situation with the Islamic State," Tamming said.

He pointed to recent federal initiatives, including introduction of Canada's first counterterrorism strategy and passage of a bill to strip Canadian citizenship from dual nationals who participate in terrorism or fight against Canadian troops abroad.

Daryl Kramp, chairman of the public safety committee, was not immediately available.

"We have to keep it in perspective. It's something that we have to take seriously. But it's perhaps not the most serious security issue facing us," he said Friday.

The public safety committee already has plans to study other topics, including victims' rights, he added. "We'll see, when we get back, what the priorities are."

CSIS director Michel Coulombe told a Senate committee in February that the Canadian-linked individuals abroad of concern to the spy service were involved in paramilitary operations, training in weapons and explosives, logistical support, terrorist fund-raising and studying in extremist schools.

Coulombe said CSIS investigates militants who come back to Canada, but added the probes were challenging.