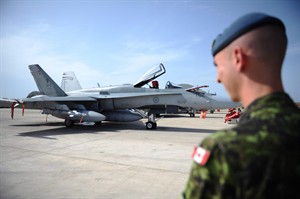 A Canadian soldier looks at a CF-18 in Trapani, Italy, on September 1, 2011. THE CANADIAN PRESS/Sean Kilpatrick

OTTAWA - "Canada has been increasing the defence spending, as I mentioned in London and elsewhere. It's up some 27 per cent since we took office. And more importantly, a significant percentage of that expansion of expenditure is investments in equipment and capacities of the Canadian Armed Forces for the future." — Prime Minister Stephen Harper

Last week, the prime minister defended his government's record on defence spending in the face of pressure from NATO allies who want to see Canada set aside more money for the military in light of growing unrest in eastern Europe and the Middle East.

Is the Conservative government adequately funding the military, as it claims?

Spoiler alert: The Canadian Press Baloney Meter is a dispassionate examination of political statements, culminating in a ranking of accuracy on a scale of "no baloney" to "full of baloney" (complete methodology below).

This one earns a rating of "some baloney." Here's why:

As part of its drive towards an overall balanced budget in 2015-16, the Conservative government instituted three lines of spending cuts and restraint over successive budgets.

They included a strategic review of spending, the deficit reduction action plan, known as DRAP, and a measure within the 2010 budget that required each department to absorb the cost of negotiated wage increases with civil servants.

The cuts were phased in and amounted to an annual $2.46-billion per year reduction at National Defence.

In addition, the military is facing "additional planning pressures" not accounted for in the main lines of spending cuts.

These expenses include the cost of severance for laid off civilians at defence; the bill for the government's pledge to sustain newly trained Afghan forces; and the cost of operating the Public Works secretariat that is picking a replacement for Canada's aging CF-18 fighters.

The latest federal budget also postponed $3.1-billion in capital spending on equipment that had been slated for the years between 2014 and 2017.

While the government has promised to "reprofile" the funds to future years, it has not spelled out when the money will be returned to the military's capital budget.

When the Conservative government came to power, National Defence's budget was $13.4 billion, according to the 2004-05 main estimates. The Liberal government of Paul Martin committed in its last budget to spend an additional $2.6 billion per year.

A decade later, defence spending is $4.8-billion higher, a nominal increase of roughly 27 per cent, but when inflation is taken into account, the difference shrinks to seven per cent.

Six years ago, the prime minister pledged the military would receive a "stable and predictable" two per cent funding increase, starting in 2011.

The escalator, as it's known, amounts to about $350 million per year and continues to be delivered, but it's been more than offset by reductions elsewhere in the defence budget.

Canada will spend about one per cent of its gross domestic product on the military this year, down from 1.3 per cent in 2009.

WHAT THE EXPERTS SAY:

The numbers have been repeatedly crunched by Dave Perry, an analyst with the Conference of Defence Associations, and there can be no argument that spending has fallen over the last few years.

"It definitely did increase up until 2010, (but) they've clearly cut spending," Perry said.

Some important contextual information is missing from the blanket assertion that spending has gone up, he added — notably the eroding influence of inflation.

"It's still an increase, but when you look at the actual purchasing power, the increase is far less significant that the 27 per cent nominal figure would imply," said Perry, who is also a doctoral candidate in political science at Carleton University.

Another factor that doesn't get mentioned is that over the last decade, even when the government was pumping more money into the military, National Defence has not been able to spend all of its budget allocation.

Since 2006, National Defence has been forced to return $9.6 billion to the federal treasury, according to a July 2013 analysis by the parliamentary budget office.

The prime minister was very clear in his marching order for cuts in 2012, pointedly telling the department that he wanted reductions focused on back room administration and a bloated headquarters establishment.

"The Forces must be restructured to ensure administrative burdens are reduced and resources freed up for the front line," Harper said on Oct. 29, 2012. "The Canada First Defence Strategy must continue to advance, and as I’ve said before, with the constant search for more teeth and less tail."

So, what impact have the reductions had?

All branches of the military tightened their belts and combined headquarters, but the big savings have come in the area of readiness, where there have been fewer flying hours, more simulator time for pilots and an army that's been parking trucks and conserving training ammunition.

University of Ottawa defence expert Phillippe Lagasse said the army has been hit particularly hard. The only exception has been special forces, which have enjoyed consistent funding.

As it currently stands, Canada would be unable to mount a sustained deployment of troops to the world's hotspots because of the cuts, according to multiple internal National Defence documents.

"Readiness has been a more immediate and obvious place to make short-term cuts," Lagasse said.

Harper's bid to cut the back room has largely fallen flat.

"This idea that you can magically find a whole bunch of savings in the administrative structure; that's not true," said Lagasse. "That's not instantaneous. It takes time and it takes a real understanding of where you want to trim."

The government has not funded the military to the extent that it promised in its 2008 defence strategy, which envisioned an investment of $490 billion over 20 years, he added.

"But we've always known that."

The experts agree that Harper is correct to say the defence budget has increased substantially, but some important qualifications have been left out of his argument.

The Conservatives have cast themselves as defenders of the military and criticism of their record is bound to sting, but both Perry and Lagasse say the numbers are the numbers.

For that reason, Harper's statement earns a rating of "some baloney."

No baloney — the statement is completely accurate

Full of baloney — the statement is completely inaccurate