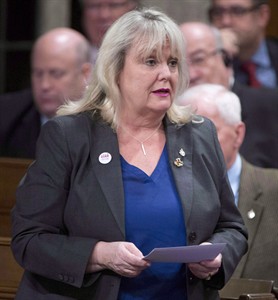 Revenue Minister Kerry-Lynne Findlay responds to a question during question period in the House of Commons on Parliament Hill in Ottawa on Wednesday April 9, 2014. More than 400 academics are demanding the Canada Revenue Agency halt its audit of the political activities of a think-tank, saying the Conservative government is trying to intimidate, muzzle and silence its critics. THE CANADIAN PRESS/Adrian Wyld

OTTAWA - More than 400 academics are demanding the Canada Revenue Agency halt its audit of a think-tank, saying the Conservative government is trying to intimidate, muzzle and silence its critics.

In an open letter, the group defends the Canadian Centre for Policy Alternatives, a left-leaning think-tank that was targeted for a political-activity audit partly because it was deemed by the agency to be biased and one-sided.

The letter says the centre is internationally respected, conducting its research in a "fair and unbiased way," and that its frequent criticisms of government policies does not make it a partisan organization.

The group is calling for a moratorium on political-activity audits of think-tanks until the tax agency adopts a neutral and fair selection process.

One of the group's organizers, economist Mario Seccareccia at the University of Ottawa, says the letter tapped into enormous frustration with the Conservative government's perceived hostility toward academic research.

"It's an environment that has been rather stifling when it comes to intellectual work," he said in an interview. "There's a real malaise. ... They've been irritating a lot of people."

Earlier this month, The Canadian Press reported on an internal tax agency document that outlined the rationale for auditing the Ottawa-based Canadian Centre for Policy Alternatives, registered as an educational charity.

The document said the research and education material on the centre's website appears to be "biased" and "one-sided," and triggered a political-activity audit in October last year.

The centre is among 52 charities currently targeted in a $13.4-million program launched in 2012 to determine whether any are violating a rule that limits their spending on political activities to 10 per cent of resources.

Auditors also want to see whether any charities are engaging in forbidden partisan activities, such as endorsing candidates for public office.

The first wave of such audits included environmental groups that have been critical of the Conservative government's energy and pipeline policies, but the net was later widened to include poverty, international aid and human-rights groups who are also often critical of policy.

The new audit program has led to what has been dubbed "advocacy chill," as some groups self-censor to avoid aggravating auditors. The audits are also draining scarce resources, especially through spending on legal fees.

Revenue Minister Kerry-Lynne Findlay has said the tax agency's political-activity audits are conducted at arm's length, without her input. Agency officials say their targeting decisions are neutral, non-partisan and balanced.

The open letter, addressed to Findlay, says the government appears to have singled out a think-tank that frequently criticizes the Conservative agenda.

"We are therefore left with the conclusion that the decision to audit the CCPA is politically motivated to intimidate and silence its criticisms of your government policies," says the text, endorsed by 424 academics by Sunday afternoon.

"Instead of trying to muzzle and impede sound and legitimate research, it is now time for you to try to promote more effectively the public good in the form of sound critical research for which Canadian researchers are respected internationally."

Organizer Louis-Philippe Rochon, an economist at Laurentian University in Sudbury, Ont., says endorsements for the letter arrived quickly from across the country and across disciplines.

"It hit a raw nerve amongst academics," Rochon said in an email.

"The idea that if we reach a conclusion other than the official doctrine of the government, our research is somehow biased and political."

Most think-tanks in Canada are registered as educational charities to allow tax breaks for their donors.

Asked about the academics' letter, a spokesman for Findlay said Sunday that registered charities reported more than $14 billion in tax-receipted gifts in 2012.

"Therefore, the Canada Revenue Agency has a responsibility to taxpayers to protect the integrity of the charitable sector, and ensure registered charities remain compliant," Carter Mann said in an email.

"CRA audits occur at arm's length from the government and are conducted free of any political interference. Our government is committed to ensuring that our tax system is fair for all Canadians."

On the web, the letter and the names of the endorsing academics: