Ontario pushes back on income splitting 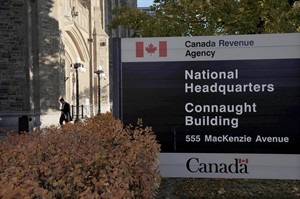 The Canada Revenue Agency headquarters in Ottawa is pictured on November 4, 2011. THE CANADIAN PRESS/Sean Kilpatrick

OTTAWA - A controversial Conservative plan to allow some Canadian families to reduce their income taxes is under fire again — this time over what it could end up costing the provinces.

The government's income splitting idea is regressive and a threat to public services, Ontario charged Thursday as the opposition renewed calls to scrap the scheme amid claims it could cost provincial coffers at least $1.7 billion a year.

"If the federal government wants to reduce taxes in its own budget, it should ensure that there is not a fiscal cost as a byproduct to provinces," said Susie Heath, a spokesperson for Ontario Finance Minister Charles Sousa.

Heath cited a new report from the University of Toronto's Mowat Centre that calls the proposal an example of the government balancing its books on the backs of provincial governments.

"Federal actions that impact provinces should only be taken with full compensation to provinces to ensure the continued ability to deliver the services and programs needed to build our economy and society," she said.

But the report, released Thursday, suggests the provinces might not be given a choice.

The issue hinges on the tax collection agreements that the federal government has in place with nearly every province and territory, with the exception of Quebec.

Those agreements, in which the federal government collects tax revenue on behalf of the provinces, require everyone to define taxable income the same way. If Ottawa changes the definition, the provinces must follow suit, the report said.

"It was not anticipated by provinces that the federal government would use these agreements as a Trojan horse to foist policy choices upon provinces and weaken their balance sheets," it reads.

The Mowat Centre bills itself as a non-partisan think-tank, although several former Liberal politicians as well as current Liberal party members — including Justin Trudeau's chief aide, Gerald Butts — are members of its advisory board.

The idea of income splitting was introduced during the 2011 campaign, when the Tories promised to allow families with children under 18 to split their incomes and lower their tax bill, conditional on a balanced budget in 2015.

While balanced books are all but assured next year, the Conservatives insisted Thursday it's still premature to talk about the provincial implications of a policy that has not yet been formally introduced.

"Our government is committed to greater tax relief that will put more money in the hands of families to allocate towards their priorities, like paying the mortgage or buying groceries," Finance Minister Joe Oliver said in a statement.

Multiple studies from across the political spectrum have criticized the plan, including at least one that noted the potential consequences for the provinces.

In a 2011 report, the C.D. Howe Institute calculated the economic impact of income splitting, coming up with the $1.7-billion figure cited in the Mowat Centre report.

At the time, C.D. Howe noted that while provincial participation wasn't an essential feature of the plan, provinces would likely be constrained by tax agreements and would be compelled to follow suit, as in 2006 when the Conservatives introduced income splitting for pensions.

The report went on to say that 85 per cent of Canadians wouldn't see any benefit from the proposal — a finding echoed in other studies. Even former finance minister Jim Flaherty expressed misgivings after this year's federal budget.

"Will the Conservatives come down off their tax high-horse, agree that this policy is unfair and renege on that bad promise?" NDP Finance critic Nathan Cullen asked Thursday during question period in the House of Commons.

There is precedent for the federal and provincial governments agreeing to compensation for changes to tax structure.

Ontario's agreement with Ottawa on the collection of the harmonized sales tax, for instance, protects the province from any decision that would result in a one per cent revenue decrease.

If the province doesn't agree with the decision in writing, the federal government has to pay up.