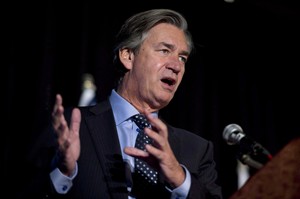 Canadian Ambassador to the United States Gary Doer addresses the Vancouver Board of Trade in Vancouver on Oct. 24, 2012. As Parliament prepares to vote on a military mission in the Middle East, one famous longtime New Democrat, Doer, is expressing support for the Harper government's position. THE CANADIAN PRESS/Jonathan Hayward

WASHINGTON - As Parliament prepared to vote on a military mission in the Middle East, one longtime former New Democrat emphatically expressed his support Tuesday for the Harper government's position.

Gary Doer was an NDP member of the Manitoba legislature for 23 years and premier for a decade, before he became Prime Minister Stephen Harper's ambassador to Washington.

When asked about the Iraq debate on Tuesday, he declined to discuss the decision of his former party and the Liberals to oppose the mission. He did, however, weigh in forcefully on its merits.

"I'm not going to comment on the opposition now, because it's not in my job description," Doer said in an interview at the Canadian embassy.

"But I'm proud of the recommendation the prime minister's made, and I respect what Parliament will do with it. ... The government, I think, is making the right decision."

Doer pointed out that his new job requires him to suspend his partisan affiliation so he's no longer an NDP member. That being said, he pointed out twice during the interview that, when he was an NDP premier, he supported Canada's military involvement in Afghanistan.

"It's on the public record I supported the mission to Afghanistan. ... As an NDP premier, I supported it," Doer said.

"I call 'em like I see 'em. I thought it was the right decision to join with our partners in Afghanistan after 9-11, to take out the Taliban that were sheltering al-Qaida."

For all the well-documented irritants in the Canada-U.S. relationship, most famously on the Keystone XL pipeline file, administration officials in Washington say Canada's staunch support of the ISIL mission has been noticed and appreciated.

Doer said he's been hearing those positive messages in his interactions with the administration.

"The administration is very pleased with the recommendation by the prime minister," Doer said.

"But they're very pleased with (Harper's) recommendation."

He dismissed the idea that the ISIL mission could have an effect on other Canada-U.S. files, like Keystone. When asked whether that bit of co-operation could lead to agreement in other areas, he interrupted before the question was even completed.

His point: You don't play politics with life-and-death military decisions.

"You've got to make these decisions on your strategic view and on your moral view of what's right," he said.

Such decisions have to be based on principles, on security imperatives and moral responsibilities, he said.

In Washington, support for the anti-ISIL operation is broad and generally shared by lawmakers of different political stripes, unlike Canada, where the opposition opposes the six-month combat resolution.

In Washington, the loudest opposition has come from critics who say the Obama administration should have been more forceful.

Some of the more hawkish critics include former members of Obama's own cabinet. Hillary Clinton and Leon Panetta, the former secretary of state and secretary of defence, have both written books that reveal that they urged Obama to arm moderate Syrian rebels well before radical Islamists came to dominate the Syrian opposition.