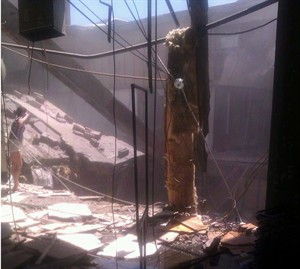 A woman looks at damage shortly after a roof collapsed at the Algo Centre Mall in Elliot Lake, Ont., June 23, 2012. THE CANADIAN PRESS/Cora Richer

ELLIOT LAKE, Ont. - Decades of incompetence, neglect, greed and dishonesty by a succession of owners, engineers and municipal officials led to the deadly cave-in of a northern Ontario mall two years ago, a judicial inquiry reported Wednesday.

In a scathing indictment of those who allowed the Algo Centre Mall to rust to the point of collapse, Commissioner Paul Belanger pulls few punches in holding those responsible to account.

"Although it was rust that defeated the structure of the Algo mall, the real story behind the collapse is one of human, not material, failures," Belanger told scores of residents at a community centre.

"Some of these failings were minor, some were not: they ranged from apathy, neglect and indifference through mediocrity, ineptitude and incompetence, to outright greed, obfuscation and duplicity."

It was on a sunny Saturday afternoon in June 2012 that the rooftop parking deck, weakened by decades of rust-causing water and salt penetration, finally crashed down.

Trapped in the rubble were Doloris Perizzolo, 74, and Lucie Aylwin, 37. Nineteen others were injured.

While Perizzolo's death was "mercifully quick," Aylwin might have lived for as long as 39 hours, Belanger concludes. He noted "tantalizing" signs she was alive for some time: responsive tapping, a muffled voice, indications from search dogs.

"There exists a possibility she might have been rescued," he writes in his 1,400-page report. "But we will never know for sure."

What is clear is that the disaster began unfolding in the 1970s. The mall, Belanger concludes, was "doomed to early failure" while still in its planning stages.

Putting parking on the roof was a bad idea. A defective roof design — using an untested combination of materials — made matters much worse.

"The system was a dismal failure from the moment it was installed," the report states.

Ironically, the mall seldom lacked for professional oversight from architects and engineers, with some 30 visits, inspections and reports over its 33-year life.

However, the scrutiny never translated into a proper fix for the leaks that prompted some to dub the centre the "Algo Falls." No one appeared to realize how severely the rust would compromise the integrity of the structural steel.

Some of the engineers involved simply forgot the "moral and ethical foundation" of their vocation and, Belanger concludes, were more concerned with pandering to clients than with protecting the public.

"Their inspections were so cursory and incomplete as to be essentially meaningless," he says.

The commissioner was particularly critical of Robert (Bob) Wood, the engineer who signed off on the health of the mall just weeks before it collapsed. His work and conduct, Belanger says, were "markedly inferior."

Wood, who faces criminal charges in connection with the collapse, admitted to falsifying his report to appease the mall's owner.

"His review was similar to that of a mechanic inspecting a car with a cracked engine block who pronounces the vehicle sound because of its good paint job," the report states.

According to the commission, the mall's various owners hid the problems, then tried to sell their way out of them when patchwork fixes didn't work. Profit considerations trumped all other concerns, Belanger says.

The "crafty" and intransigent Bob Nazarian, who owned the mall when disaster struck, lied about repair work, and resorted to "subterfuge and falsehood to mislead authorities, tenants and the public," the report concludes.

Wilfully blind municipal officials — the mayor, council and building inspectors — were of little use in dealing with the worsening problems.

They ignored public complaints and warnings about the leaks and falling concrete. They illegally shut the public out of meetings. They failed to enforce, or were ignorant of, their own bylaws, according to the report.

Instead, their approach was one of "non-interference" aimed at safeguarding the mall as a social and economic hub that provided significant tax revenues.

At one point, Belanger notes, the municipality was the mall's owner, its tenant, and enforcer of property standards — the "worst possible conflict situation."

"Occasional voices of alarm and warning blew by deaf and callous ears."

While townspeople appeared pleased with the report, many wanted to know whether others would face criminal action.

"With two dead people, how do they get ahead with only charging one man?" an emotional Ed Eckert, 80, asked commission lawyers.

"Who do we have to wait for, sir? Will I still be here, on this Earth?"

Aylwin's fiance, Gary Gendron, said the report had brought him some peace.

"It's sad and it feels good at the same time," Gendron said.

"I feel a little bit better: somewhat of a closure, but more of a closure when there'll be some criminal charges laid."

The lawyers pointed out that it would be up to police to lay charges.

The report also notes that officials with the provincial Ministry of Labour, which had offices in the mall, appeared curiously indifferent to the state of disrepair, and unresponsive to complaints.

In all, the report from the $20-million inquiry makes 71 recommendations. They include setting minimum maintenance standards for buildings, beefed-up inspections, and an expanded emergency response capability.

Belanger is effusive in his praise for the initial local emergency response. His view of the provincial heavy urban search and rescue team that was called in — despite the good intentions and courage of its members — is far more jaundiced.

The team deployed without sufficient numbers, without a proper plan or command structure, and treated family members and the community poorly, he says.

They also ignored an offer of help from experienced mine rescuers. They called off the search due to the dangerous conditions instead of simply putting the effort on hold while they considered other options.

The rescue effort, he says, was not a model others should strive to emulate.

He does, however, praise then-premier Dalton McGuinty for getting the rescue effort restarted.

In response, the Ontario government promised a quick review of the recommendations to ensure the province is better prepared for any emergency.

Provincial police said they had made improvements to their crisis response, including mandatory training for major critical incident teams who are now deployed throughout the province.