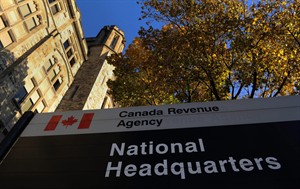 The Canada Revenue Agency headquarters in Ottawa is shown on November 4, 2011.THE CANADIAN PRESS/Sean Kilpatrick

OTTAWA - A left-leaning think tank is raising new questions about the possibility of political interference in audits of charities.

The Broadbent Institute says a review of financial records from 10 right-leaning organizations show none of them report carrying out any political activities despite public statements which could be interpreted otherwise.

Yet those groups seem to be escaping the scrutiny of Canada Revenue Agency audits into the political activity of charities even as a host of left-leaning groups are under the microscope, the institute says in a report being released Tuesday.

Though the CRA denies a group's place on the political spectrum is what triggers an audit, the Broadbent Institute report says the only way to know for certain is to have an impartial inquiry into their work.

"This report, I think, adds to a growing amount of evidence that that CRA may be less interested in compliance with the law than it is in politically-motivated retribution against the Harper government's critics," said Rick Smith, the executive director of the Broadbent Institute, an organization founded by former NDP Leader Ed Broadbent.

"So that's why we are saying an independent inquiry is very clearly called for here."

The CRA is currently conducting audits into whether registered charities are breaking a rule which prohibits them from spending more than 10 per cent of their money on political activities or are engaging in partisan work.

The audits began in 2012 with a special $13.4-million-dollar program around the same time as Conservative ministers were attacking environmental charities as being terrorists.

Since then, nearly four dozen have been called for review, many of whom have been critical of the Conservative government on issues ranging from environmental concerns to poverty issues.

The apparent targeting of Conservative critics has triggered cries of political interference in the process, but both the agency and National Revenue Minister Kerry-Lynne Findlay have denied that's happening.

The 10 right-leaning groups analysed by the Broadbent Institute have reported spending no money at all in the last three years on political activities.

That's despite many of the groups releasing statements or reports critical of government policy, which is similar to what left-wing groups appear to have been targeted for doing.

Some of the left-wing groups have also reported spending nothing on political activities, while others have admitted to allocating small portions of their budgets.

"At the very least what's going on here is that different charities have very different interpretations of what CRA means by political activity," Smith said.

It's unknown whether most of the agencies reviewed by the Broadbent Institute's analysis could in fact be under audit are in fact being audited as that information is not publicly available.

Two, the Macdonald-Laurier Institute and C.D. Howe, have said they are not under investigation.

The Fraser Institute and the Montreal Economic Institute have declined to comment.

The status of the remaining six is unknown.