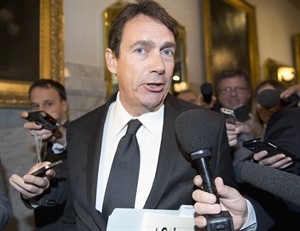 Quebec Opposition MNA Pierre Karl Peladeau responds to reporters questions as he enters a caucus meeting, Tuesday, Oct. 28, 2014, at the legislature in Quebec City. Media magnate and politician Peladeau says there is no conflict of interest in his adopting the same position as his company on reductions to a Quebec government tax credit. THE CANADIAN PRESS/Jacques Boissinot

QUEBEC CITY, Que. - Pierre Karl Peladeau has dismissed as "ridiculous" fresh conflict-of-interest allegations levelled at him after it emerged he intervened in a matter related to his media company, Quebecor Inc.

The potential Parti Quebecois leadership candidate insisted Wednesday there was no conflict of interest when he criticized a reduction to a Quebec government tax credit for film and television production.

"Very soon, I won't be able to talk about education because they'll accuse me of having children," said Peladeau, who is controlling shareholder of Quebecor (TSX:QBR.B).

"I will always have conflicts of interest. What the members of the (Coalition party) and the Liberal party are saying is ridiculous."

The member of the legislature said he didn't gain any personal benefit by knocking a Liberal decision to reduce the tax credit, a view that is the same as Quebecor's.

It is the second time in recent months that Peladeau has been accused of favouring his company.

Peladeau said that on both occasions he was acting in the defence of "general interest." The other case involved the sale of a Quebec film studio that was attracting foreign interest while Quebecor was in the bidding.

Peladeau noted that his opinion on the 20 per cent reduction in the tax credit merely reflects the consensus in the province's media industry.

Quebecor is one of several companies that benefit from the credit.

Peladeau said he did not feel he put himself in any compromising position, even if the issues affected Quebecor.

"When you act in the general interest there is no conflict of interest," Peladeau said, adding he's simply fulfilling his duties as an economic critic, an elected official and member of the Opposition.

The PQ chalked up his first ethics brouhaha to a rookie political mistake. This time, Agnes Maltais, the party's house leader, said Peladeau was simply echoing the PQ's historic position on the issue.

His political opponents weren't quite as forgiving.

"On the first occasion, the Parti Quebecois said it was a mistake, the second, was it also a mistake?" Fournier asked. "How many mistakes will it take to show there is a problem?"

Eric Caire, a spokesman for the Coalition for Quebec's Future, said a second allegation of conflict of interest as well as silence from PQ leadership on the matter was worrisome.

"Well, for a simple MNA, two times he put himself in a critical situation, ethically speaking," Caire said. "If he can do this as a simple MNA ... what does he do if one day he becomes premier?"

Peladeau told reporters he will leave it to the ethics commissioner to decide if he violated the code of ethics that governs members of the national assembly.

The ethics czar has already agreed to look into allegations that Peladeau intervened politically on the question of the future of the Montreal movie studio Quebecor was bidding for. The studio is partly owned by the Quebec government.

Peladeau has previously said his only intent was trying to keep Vision globale, owner of Mel's Cite du cinema, in Quebec hands.